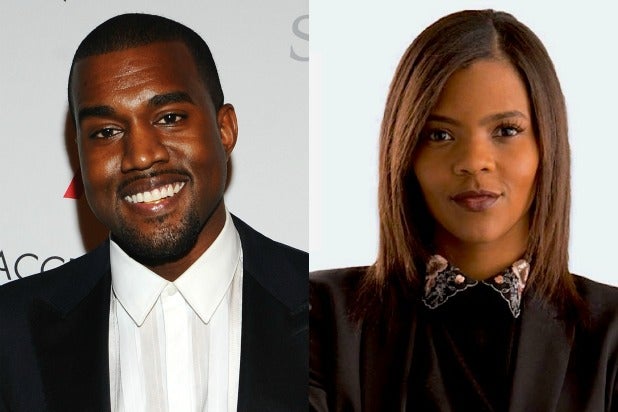 Kanye West voiced his liking of conservative YouTube personality Candace Owens on Saturday, upsetting many of his fans.

Owens — a frequent guest on Fox News and InfoWars — launched a website and YouTube channel in 2017 called Red Pill Black, which promotes black conservatism. She has hailed President Trump as not “just the leader of the free world, but the savior of it as well,” and has been known to blast Black Lives Matter.

West tweeted Saturday: “I like how Candace Owen thinks.”

Upon seeing West’s endorsement, Owens quickly responded: “I’m freaking out. @kanyewest ….please take a meeting with me. I tell every single person that everything that I have been inspired to do, was written in your music. I am my own biggest fan, because you made it okay. I need you to help wake up the black community.”

West giving his nod of approval to Owens didn’t sit well with many of his 11 million followers.

Aside from being an insane alt right race pimp Candace Owens thinks Donald Trump is literally the messiah not you @kanyewest so you might want to reconsider https://t.co/dKVnbi3Ila

Candace Owens has proven to be anti-Black, anti-LGBTQ and fact-hating.
(Honestly, there are so many more descriptors.)

For Kanye to align himself with her is messy and dangerous.

Bruh. This is so disturbing. This says more about you than her.

For those that don’t know Candace Owens thinks Donald Trump is a savior. https://t.co/QH1L1gj4Wi

As I've said many times before, if I had no dignity I would be a very rich man by now. Candace Owens is making money off of denigrating black folks for her mostly white audience. Same as that Noir guy, same as Stacey Dash, same as Allen West etc. https://t.co/ljA5kgvcS1

How many times can Kanye signal his affinity for people with anti-Black policies and positions before it takes a toll on how Black fans feel about him?

The easiest way for a black person to achieve success is by attacking the majority of other black people. It's a lazy approach to commentary that requires no serious thought or understanding of the impact of 400 years of systemic social, cultural and political oppression. https://t.co/PsEKxoIzus

But Owens held her ground and clarified her perspective.

Far right? Allow me to clarify: I believe the black community can do it without hand-outs. I believe the Democrats have strapped us to our past to prevent us from our futures. And I won’t stop fighting until all black Americans see that.
I’m not far right—I’m free. pic.twitter.com/wtqCuYPtM2

West met in December 2016 with then President-elect Donald Trump. TMZ reported at the time that West requested a 15-minute meeting with Trump, who later told reporters, “We discussed life.” Two months later, West deleted all of his tweets supportive of the new president.