Kanye West was supposed to debut his “Famous” visual (aka music video) live at 7 p.m. Friday night at The Forum in Los Angeles and on the streaming service Tidal.

The hip hop artist did appear on time and addressed the audience, flanked by his wife Kim Kardashian West and mother-in-law Kris Jenner.

Kanye announced that the premiere would be delayed 30-45 minutes to allow everyone who bought tickets and those buying merchandise to fill the noticeably empty venue. And while Kanye boasted the event “sold out in 20 minutes” — at $25 per ticket — the sparse crowd tells a different story. Several fans also tweeted they got complimentary tickets via Tidal, but 30 minutes past the scheduled premiere, The Forum still looks very empty.

Impatient fans have taken to Twitter to express their dismay. Check out some of the funniest reactions below. Several fans joke that Taylor Swift is behind the delay, since Kanye dissed her in the song.

I thought it be filled up by now #TidalxFamous

Taylor swift waiting for this video to drop #TIDALXFAMOUS pic.twitter.com/Lo9keecoQj

The suspense Kanye is giving us right now…too real #tidalxfamous

#tidalxfamous WHEN THIS POPPED UP I SCREAMED BUT IT HASN'T STARTED YET pic.twitter.com/2lAq3nrNY2

When the "Famous" premiere is delayed 30 mins due to the merch line. #tidalxfamous pic.twitter.com/rL8alZopsW

the scene at the forum looks positively doomsday culty #tidalxfamous 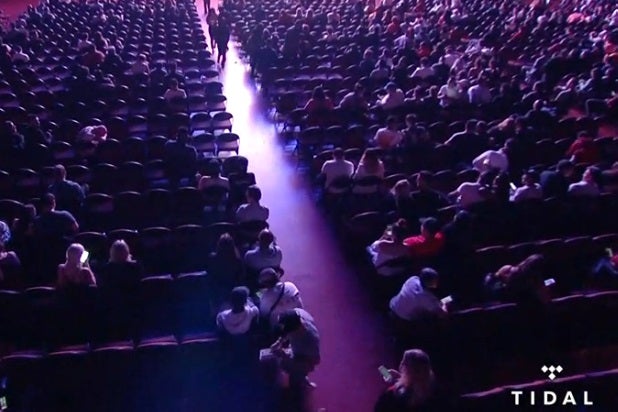