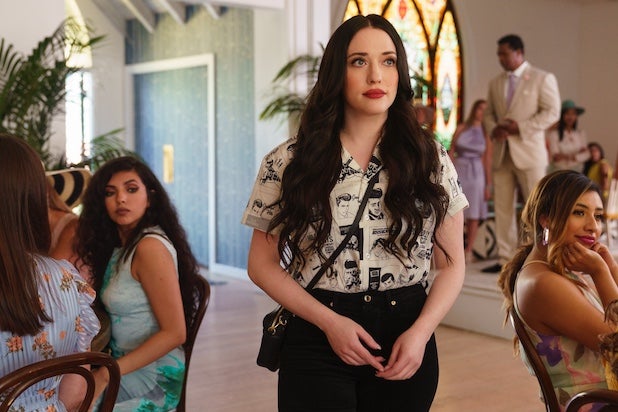 Kat Dennings stars in Hulu’s new comedy series “Dollface,” out on Friday. It’s a story about a girl named Jules who gets dumped by her boyfriend and quickly realizes that she’s let all her female friendships deteriorate over their five-year relationship.

But the most jarring element of the first episode isn’t Jules’ unceremonious dumping. It’s the cat-lady who shows up, unannounced, to pick her up in a Greyhound-style bus to take her on the journey back to hanging out with other women.

She’s not the kind of cat-lady who wears nightgowns, perpetually smells like Fancy Feast and spends most of her nights at home with her 9 cats. She’s a cat-lady in the literal sense that she has the body of a woman but the head of a giant cat.

If your reaction when you see her is “What the f–k is this?” Dennings says, “That’s what we wanted.”

TheWrap caught up with the former “Two Broke Girls” star ahead of the premiere of “Dollface,” which she calls “a rom-com for friends.”

“You kind of don’t really know what the deal is, if she’s in Jules’ imagination, or if she’s really there,” Dennings says of the cat-lady. “Kind of like the Calvin and Hobbes thing — that’s what I call it. Is she a good presence, or is this some weird, dark, magical element? I really like that. As a viewer, I like being withheld from.”

But if the cat-lady isn’t the spookiest element of the show, then it’s the all-too-relatable scenario of accidentally isolating yourself from all your friends while in the throes of an intense relationship. It’s a place Dennings has found herself in before.

Also Read: Here's Everything Coming and Going on Hulu in December

“I’ve been through the thing of being in a big relationship and orbiting that person and letting the things that make me, me kind of disappear,” she said. “So it felt cathartic to do this, cause I’ve done it. I’ve been a Jules.”

And that’s not the only element of the show that draws parallels to Dennings’ reality– she’s also best friends in real life with her on-screen ride-or-die, Brenda Song.

“We’re kind of inseparable,” she says of her co-star, of “The Suite Life of Zack and Cody” fame. “We used to live around the corner from each other, so pretty much every morning she would pick me up and we’d go to set together and drive home together at the end of the day.”

Dennings also revealed that before she got the call about doing “Dollface” from Margot Robbie’s production company Lucky Chap, she was re-considering her relationship to TV acting.

“I was kind of at a place where I wasn’t sure if I even wanted to do more TV,” she says. “I really wasn’t sure what to do.”

It’s an understandable hesitation — after spending six seasons playing Max Black on “Two Broke Girls,” the thought of playing the same character for an extended period of time was a daunting one, Dennings says.

“I think as an actor, playing the same person for 7 years of your life is amazing, and also a little bit scary. Just ’cause you’re like, ‘Oh God, can I really be this person for another however many years?'” she says. “I was just like, ‘Oh man, can I do that again but with a different person?”

She decided the answer that question was yes. “I feel like Jules is somebody I could handle for another however many seasons. At this juncture in my life, I don’t know if I could do a show where I’m covered in blood and screaming and crying every episode. “