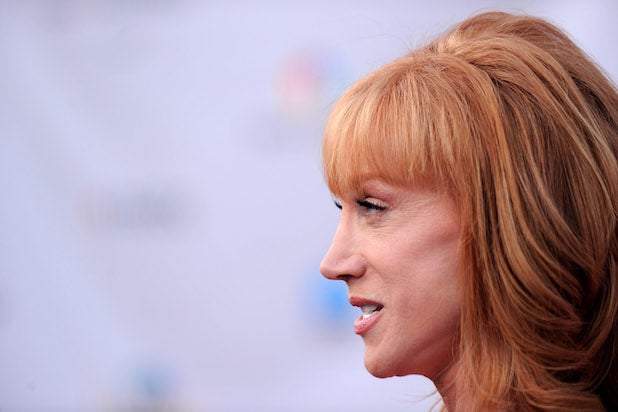 Kathy Griffin says she “will not be intimidated” by the potential explosive devices sent to prominent critics of President Trump.

“For the past three years, many people have warned that the rhetoric coming from Donald Trump would end up encouraging the kind of conduct we’ve seen in the past 48 hours with prominent politicians and former top officials receiving pipe bombs in the mail,” Griffin told TheWrap in a statement Thursday. “I’ve seen first hand the kind of hate and threats the president and his family can gin up with their statements and tweets. I will not be intimidated by them or anyone else.”

All have criticized Trump — and received his criticism.

Like De Niro, who famously shouted “F– Trump” during the Tony Awards earlier this year, Griffin has been a vocal critic of the president, who last year posed with what appeared to be a fake decapitated head of Trump.

She was accused at the time of encouraging violence, and the Secret Service investigated her.

“Terrorism isn’t just about inflicting physical harm,” Griffin said in her statement. “It’s biggest objective is to silence people, to stop people from doing and saying the things that other people find threatening.”

On Wednesday, Trump vowed to “get to the bottom” of who sent the mystery packages, and said political violence has no place in the United States.

But soon after, he tweeted, “A very big part of the Anger we see today in our society is caused by the purposely false and inaccurate reporting of the Mainstream Media that I refer to as Fake News. It has gotten so bad and hateful that it is beyond description. Mainstream Media must clean up its act, FAST!”

Investigators have been searching for clues to the motives behind the packages, analyzing the devices inside them to assess whether they were intended to detonate or just sow fear in the days leading up to the mid-term elections.

“Anyone who thinks they can silence me should talk to my beloved 98-year-old mother Maggie, she’s been trying to keep me quiet for 57 years and has yet to be successful,” Griffin said. “I’m not going to say more about this matter for now. I believe it’s important to focus on the midterms which is how we can change some of the leaders in office who are helping to spread this horrific rhetoric.”