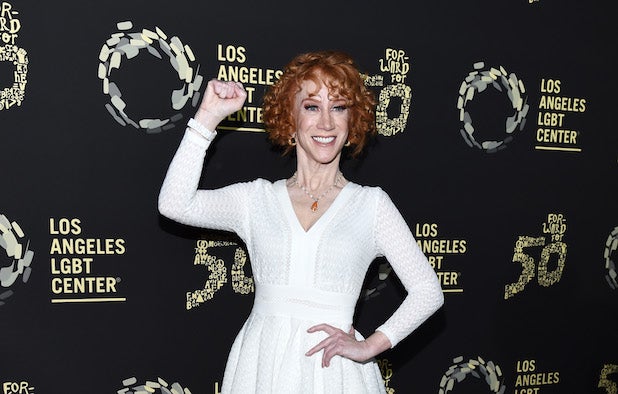 Kathy Griffin says she wishes she were seen as a “First Amendment hero” like Colin Kaepernick, the quarterback and activist.

“I wish that I was Colin Kaepernick and I wish that I was seen as a First Amendment hero to the tune of Nike giving me a $100 million deal or whatever,” Griffin said in an interview with Prune Magazine on Friday, where she was photographed in various Joan of Arc-style outfits.

Kaepernick, who had been protesting against racial injustice and police brutality by kneeling during the national anthem, inked a deal with Nike last year for the company’s 30th anniversary “Just Do it” campaign. Earlier this year, the NFL settled a lawsuit with Kaepernick, who had accused the league of colluding against him.

Meanwhile, Griffin drew intense backlash in 2017 for a photo where she was depicted holding a beheaded mannequin head of Trump covered in ketchup. Since then, Griffin lost hosting gigs and said she was effectively “blacklisted” from Hollywood. But the comic also completed an international “comeback” comedy tour and released a self-produced documentary, titled “Life on the D-List.”

Also Read: Kathy Griffin Documentary 'A Hell of a Story' Acquired for One-Night Only Theatrical Release

Griffin, whose photoshoot with Prune Magazine features the comic posing in several sets of armor, told the magazine she felt like Joan of Arc because of the metaphorical armor she’s had to wear since the Trump photo.

“In a smaller, comedic, modern way, there are times when I’m leaving my home and mentally I’m wearing one of those coats of armor, because I have to. I don’t know who’s gonna come at me or why. I can’t act like the photo fallout is over,” Griffin said. “I’m always a little bit prepared but I still always want to be open to hilarity, comedy, kindness and humanity. It’s a little bit of a balance act.”

Despite the death threats and the federal investigations into her, Griffin has not shied away from her critique of Trump.

“I’ve had to spend over two years trying to convince other people I’m a human being, and there are a lot of people who are in that situation,” she said. “The Accidental President and its cronies do create a lot of false fear of ‘The Others,’ and I take a little bit of pride that little-old 58-year-old, 5-foot-3, 110-pound Kathy Griffin actually scared the shit out of them.”

See a photo of Griffin from the magazine shoot, carrying a shield with the First Amendment scribed on it, below:

D) “At the end of the day, like Joan, Kathy Griffin is unbroken…there’s one fact I have no doubt about. Kathy Griffin is ready to do what she does best: be funny.” @ReelJeffEwing @mikeruiz1 pic.twitter.com/NTWO3sONkw