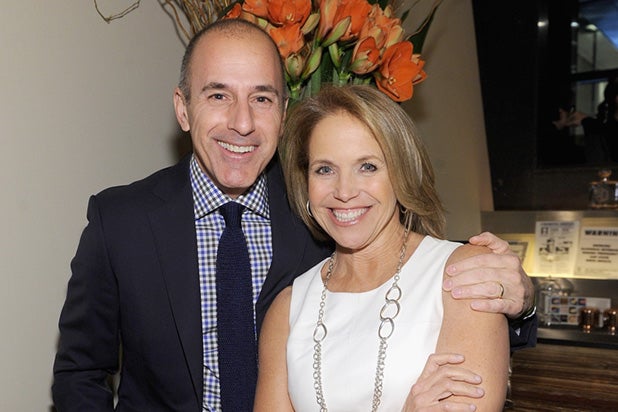 Katie Couric has finally spoken out in some detail about the Matt Lauer sexual misconduct scandal.

In breaking her silence to People magazine, Couric called the accusations against her former “Today” show co-host “disturbing, distressing and disorienting” and “completely unacceptable.”

“This was not the Matt we knew,” she said.

“The whole thing has been very painful for me,” Couric said. “The accounts I’ve read and heard have been disturbing, distressing and disorienting and it’s completely unacceptable that any woman at the ‘Today’ show experienced this kind of treatment.”

“I had no idea this was going on during my tenure or after I left,” she continued. “I think I speak for many of my former colleagues when I say this was not the Matt we knew. Matt was a kind and generous colleague who treated me with respect. In fact, a joke I once made on late-night television was just that, because it was completely contrary to our brother-sister relationship. It’s still very upsetting. I really admire the way Savannah [Guthrie] and Hoda [Kotb] and the entire ‘Today’ show staff have handled a very difficult situation.”

Here’s the joke Couric was referring to above.

Prior to these remarks, Couric had only responded to an Instagram comment on the allegations against her friend.

“Nothing to say on Matt?? Huh – ya’ll would have been all over the story years ago,” said one social media user.

“It’s incredibly upsetting and I will say something when I’m ready to,” Couric wrote back at the time. “Thanks for your interest.”

Couric and Lauer co-hosted the popular morning show from 1997 to 2006.

Lauer was fired from his NBC News gig in late November after a colleague filed a complaint of “inappropriate sexual behavior in the workplace” against the longtime “Today” show host.

Hoda Kotb has since replaced him, and the chief “Good Morning America” competitor’s Nielsen TV ratings have not skipped a beat since.