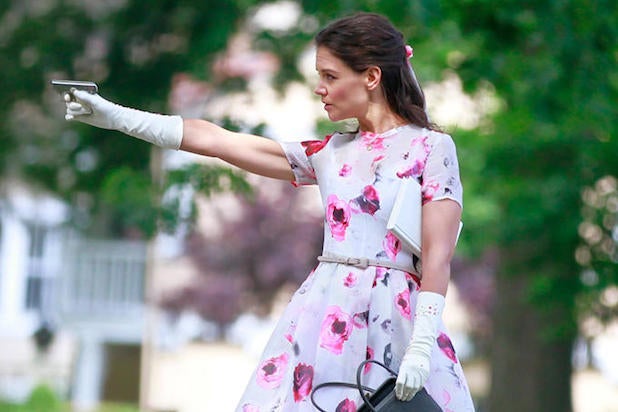 Katie Holmes‘ vigilante comedy “Miss Meadows” will hit theaters this fall via Entertainment One Films, which has acquired U.S. and Canada distribution rights, it was announced Thursday by eOne’s Berry Meyerowitz.

The agreement marks the first film acquisition under Meyerowitz, who is integrating his Phase 4 Films into eOne.

In “Miss Meadows,” Holmes plays a sweet and proper elementary school teacher whose perfect manners and pretty floral dresses hide a dark secret: when she’s not teaching at the local elementary school or tending to her garden, she’s moonlighting as a gun-toting vigilante.

“‘Miss Meadows’ is a witty, smart and vibrant film, and Katie is an absolute sensation as the seemingly wholesome, innocent teacher with a seriously deadly alter-ego,” said Meyerowitz. “The film is as colorful and irreverent as it is dark and subversive, and audiences will fall in love with the fresh story that Karen Leigh Hopkins has brought to life.”

“Our goal has always been to bring Katie’s performance to as wide an audience as possible. The eOne team has as much enthusiasm for this film as we do. We couldn’t be more excited,” Brenner and Carliner said in a joint statement.

“I’m so proud of this character and this film. I’m excited for audiences to see it,” added Holmes.

The deal was negotiated for eOne Films by Larry Greenberg, senior VP of acquisitions, and for the filmmakers by ICM Partners, which represents Holmes along with Untitled Entertainment and Sloane, Offer, Weber and Dern.