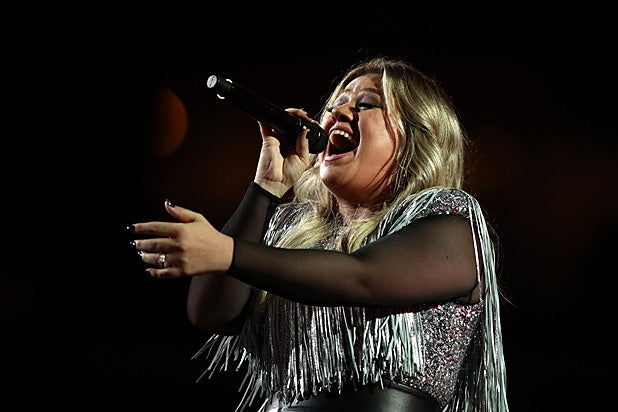 The “American Idol” alum performed a special concert to commemorate the opening night of the 50th U.S. Open on Monday, and to say that she nailed it is an understatement.

Three-time Grammy winner Clarkson belted out a medley of her old and new hits in the six-song set before Serena Williams took over the court to play against Magda Linette in the first night match on Arthur Ashe Stadium.

The “Since U Been Gone” singer won over the crowd at Flushing Meadows with the swiftness that Grand Slam champion Williams usually dominates her opponents, prompting a flood of applause on social media — and multiple calls for her to be crowned the next Super Bowl halftime performer.

“Why haven’t we had a Kelly Clarkson Super Bowl halftime show yet,” one Twitter user marveled.

“In case your wondering, @kelly_clarkson brought the house down with ‘Since U Been Gone’ and played all her hits,” said another fan.

The U.S. Open airs live on ESPN and ESPN2. The opening night 50th Anniversary festivities were co-hosted by Billie Jean King and Mike Greenberg, co-host of ESPN’s weekday morning show “Get Up.”

See the top tweets below.

If Kelly Clarkson performed at the opening of every sports event, no one would ever kneel. Forget the anthem. I stand for Kelly. #USOpen

It’s the 50th anniversary of the US open and so they are turning it out.

Kelly Clarkson got up like 100 feet from us, belted all 6 of her major hits like an assassin, and just like. Left. And now the Kelly Clarkson concert is over

Kelly Clarkson’s singing career as a tennis one:
–Wins major at 20 as WC
–Is world No.1 for 3 years
–Public split w/ longtime coach, falls out of top 20
–Wins doubles major w/ Reba
–Comes back 2 years later, wins another handful of Slams
–Crowd favorite by 2012… & forever pic.twitter.com/xb7uKvtW65

The three-time @Grammys winner brought down the house during the 2018 #USOpen Opening Night ceremony!https://t.co/pkt7km4yn5 pic.twitter.com/cq4quCVp4f

I feel like @kelly_clarkson just submitted her audition for the Super Bowl #USOpen2018 pic.twitter.com/uI09dk77zk

In case your wondering, @kelly_clarkson brought the house down with “Since U Been Gone” and played all her hits. Many people dancing in the stands including my new friend Lee, a @usopen staffer who was drooling over my lobster roll. Stay tuned for that! Enjoy! #USOpen pic.twitter.com/SWE6TttnKm

@kelly_clarkson is a national treasure.. my GOSH we don’t deserve her! #KellyClarkson #USOpen

@kelly_clarkson you rocked that house and I got chills watching all the way from SE Wisconsin!!! https://t.co/EwAoOw0Era

Kelly Clarkson slaying every single show she has; indeed a true singer and performer.