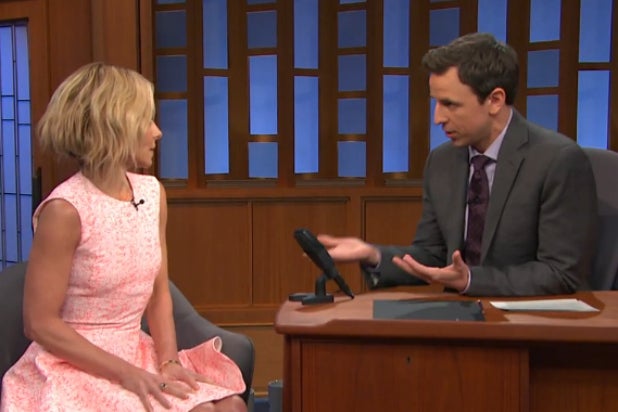 “Now that you are a talk show host, people will tell you everything about themselves, always, everywhere you go,” Kelly Ripa told Meyers on NBC’s “Late Night” Wednesday, a reunion of the temporary morning co-hosts.

The former “SNL: Weekend Update” anchor and show head writer had a quick retort: “You know what you should say? You should always go, ‘That’s great, but we have to go to commercial.'”

Next, the two discussed the annual upcoming “Live With Kelly and Michael” morning-after Oscar special.

Last year, Ripa tried to catch an hour’s worth of sleep before her ridiculously early Los Angeles call time. But this time around, she and co-host Michael Strahan are going to show up drunk, just like their guests — there won’t even be time for makeup reapplication.