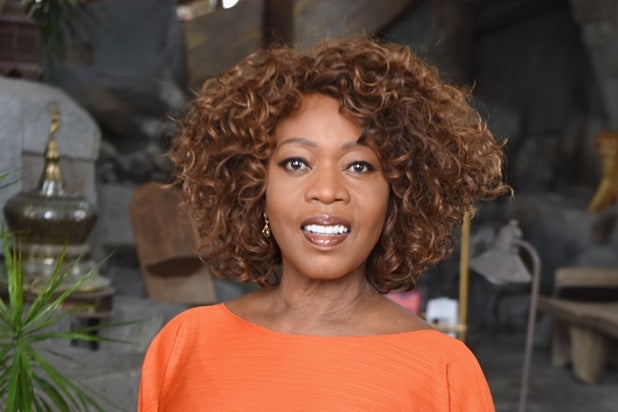 Alfre Woodard has joined the cast of the Sony Pictures’ drama “Fatherhood” opposite Kevin Hart. She will play Hart’s mother-in-law.

The film is an adaptation of author Matt Logelin’s memoir “Two Kisses For Maddy: A Memoir Of Loss & Love.”

The novel details Logelin’s life after his high school sweetheart, Liz, dies after giving birth to their daughter Madeline. Though confronted with devastating grief and the responsibility of being a new and single father, Matt chooses to keep moving forward and to make a life for his newborn daughter, his remaining link to his beloved wife.

Paul Weitz will direct the film from a screenplay by Dana Stevens. Weitz penned the current draft.

Temple Hill’s Marty Bowen and David Beaubaire are producing along with Free Association’s Peter Kiernan and Hart, for his HartBeat Productions company.

Woodard’s next appearance will be as a CGI lion in Jon Favreau’s live-action remake of Disney’s “The Lion King,” in which Woodard lends her voice to Simba’s mother, Sarabi.

Oscar nominee Woodard also stars in the Sundance hit “Clemency,” which won the Grand Jury Prize at the 2019 film festival, making director Chinonye Chukwu the first black woman to win the award. The film follows Woodard as the warden of a maximum-security prison as she prepares to execute another inmate and is forced to confront the psychological and emotional demons that years of carrying out death row executions have taken, ultimately connecting her to the man she is sanctioned to kill.

“Clemency” was acquired by Neon, which plans to release the film later this year in December. Woodard will also star opposite Jason Mamoa in Apple’s original series “See,” when the streaming service eventually launches later this year.

Woodard is represented by ICM, Circle of Confusion and Gochman Law Group.