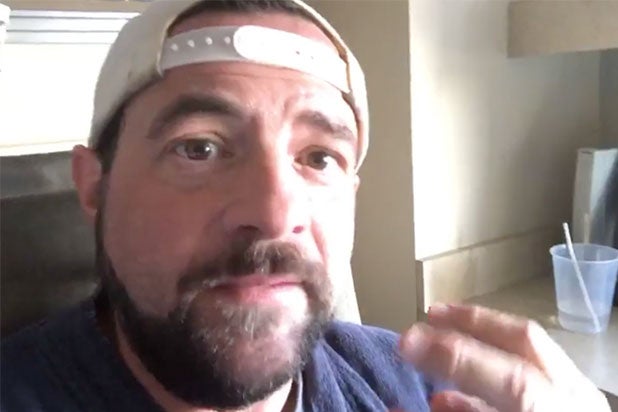 Following Kevin Smith’s “massive heart attack” on Sunday night, the filmmaker took to Facebook to walk fans through what transpired after his stand-up show and to assure them that he’s “still standing.”

“I started feeling nauseous, and I tried to lay down on the floor, and when I was laying down on the floor, I wound up getting ill, like threw up but mostly bile,” Smith said in a Facebook Live video on Tuesday. “I just thought I got some bad milk. That was it.”

He continued, “I started feeling pressure on my chest, but not like, ‘There’s an elephant on my chest,’ I just couldn’t catch my breath. Honestly, I was never really in pain.”

Smith continued to say he didn’t feel any pain and because of that and his age, he didn’t realize that he could be experiencing a heart attack.

“Because of that, and because I’m 47, I didn’t piece together ‘heart attack,’ even when I was sitting going like ‘My chest is heavy and stuff,’ and even though my father died at age 67 of a massive heart attack and even though my mother has heart problems and she has two stents in her arteries in her heart, I never in a million years thought it was heart attack,” he said. “Honestly, I thought I was mucus-y because I had two joints earlier in the day.”

Soon, doctors told him they needed to “shave his groin” because they were going to go up his groin to see the heart.

“My biggest fear in life: Death, number one. People seeing my dick, number two,” Smith said. “So they went in there and went up my leg and my groin and completely went in, they found the LAD [left anterior descending artery], it was 100 percent blocked, put a stent in, bam, here I am. Dude literally saved my life.”

Smith tweeted early Monday that he suffered a “massive heart attack” after a stand-up show in L.A. on Sunday night. The writer-director-comic had been shooting “Kevin Smith Live!” at the Alex Theatre in Glendale when the incident occurred and he canceled the second of two scheduled performances.

Many fans went on social media to send the comedian well-wishes, and Smith said “it was kind of like reading your eulogy,” seeing what the reaction would be if he died.

Actor Chris Pratt faced some backlash for tweeting that he was “praying his a– off” for Smith, adding that he believed “in the healing power of prayer” and asked others to join in with him.

“Poor Chris Pratt, one of my favorite actors on the planet, f—ing put up a nice tweet, where he’s just like ‘Hey man, I don’t know you that much but I love ‘Clerks’ and I’m praying for you’ and and apparently people were like, ‘F— your prayers’ and attacked him and s—,” Smith said about the backlash. “Number one, thanks to Chris Pratt, how sweet was that, Starlord praying for me. Number two, please don’t fight over stuff like that. It’s a waste of time. Whether you’re religious or not, someone saying ‘I’ll pray for you,’ it’s good intentions.”

Smith will now undergo a massive lifestyle change, adding regular visits to the cardiologist to his schedule. Responding to people saying he suffered a heart attack because he was “too fat to fly,” he said he had lost a lot of weight in recent months but “some s— don’t matter, some s— you can’t change because it’s genetics.”

Watch his full video below.