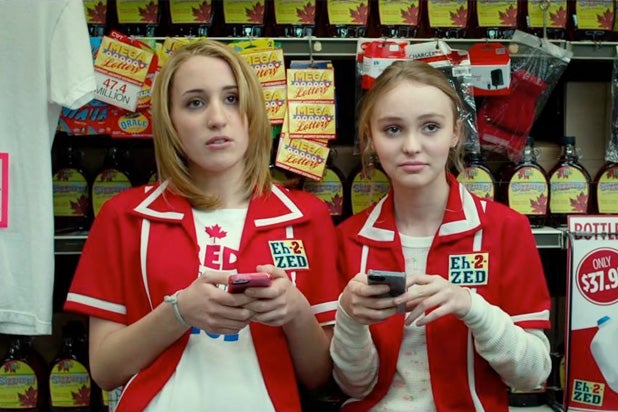 Invincible Pictures has acquired Kevin Smith‘s “Yoga Hosers” and will release the film in theaters this summer following a roadshow across the U.S., the company announced Thursday.

Smith will tour with the film during throughout June and July, doing Q&As after each screening. The tour will be followed by a theatrical release on July 29. Tickets for the tour will go on sale Friday, April 29, at 11 a.m. PT at yogahosers.com. Current tour dates are listed below, with additional dates to be added soon:

Reprising their roles from “Tusk,” the younger Depp and Smith play 15-year-old yoga nuts Colleen Collette and Colleen McKenzie, who love their smart phones and hate their after school job at Manitoban convenience store Eh-2-Zed. But when an ancient evil rises from beneath Canada’s crust and threatens their big invitation to a Grade 12 party, the Colleens join forces with the legendary man-hunter from Montreal named Guy Lapointe (the elder Depp) to fight for their lives with all seven Chakras, one Warrior Pose at a time.

“Invincible has been a huge supporter of ‘Yoga Hosers,’ and Kevin from day one,” said the company’s CEO Thomas Ashley, “We are honored for ‘Yoga Hosers’ to be our first theatrical release and to give it the attention it deserves. ‘Yoga Hosers’ is a blast designed for a youth audience. Harley Quinn Smith’s and Lily Rose Depp’s break out performances do not disappoint.”

Also Read: Kevin Smith on Why He Made 'Yoga Hosers': 'I Can't Let a Bad Idea Die' (Video)

“I can’t thank Tom and the whole Invincible team enough for backing the weirdest, least appropriate kids’ movie ever made,” said director Smith. “‘Yoga Hosers’ means the world to me: because my family is in it and because it’s the movie I most wanted to see back when I was a 12-year-old girl. And even though I made the people I love most in this world do and say some of the stupidest shit ever put in a movie, I was still very particular about who would shepherd our film into the box office wild lands. Invincible made a passionate case for making us their inaugural theatrical release. And even though I took four years of Spanish in high school, passion is my second language. I can’t wait to tour the movie and watch it right beside the audience every night, and then answer for my sins afterwards.”

Produced by StarStream Entertainment, Smodcast Pictures and Destro Films, “Yoga Hosers” is the second installment of Smith’s True North Trilogy. “Tusk” was the first film, and “Moose Jaws” is expected to close the trilogy. Smith recently directed his daughter in a segment of the anthology horror movie “Holidays,” which is currently available on VOD.