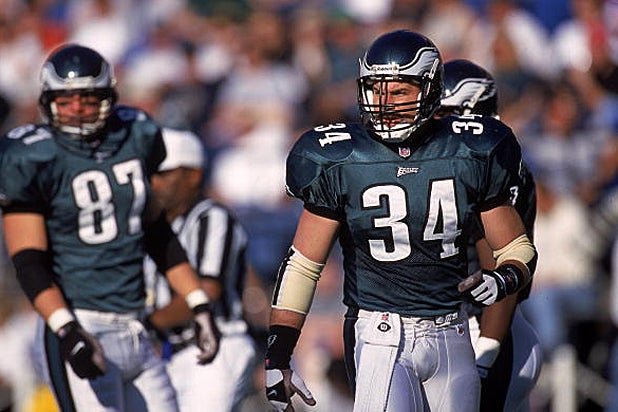 Kevin Turner, an NFL fullback who played for the Philadelphia Eagles and the New England Patriots, died Thursday. He was 46.

A former Alabama standout who spent eight seasons in the NFL, Turner was diagnosed with ALS, also known as Lou Gehrig’s disease, in 2010.

“Myra and I lost a great son today. He will be missed so much. Thank everyone so very much over this journey we have had for all your support, prayers,” his father, Raymond Turner, wrote on Facebook. “He was ready to go to Heaven excited he said. Love yall, and thanks God Bless.”

After becoming active in research and support for traumatic football brain injuries, Turner went on to become one of the lead plaintiffs in a head injury lawsuit against the National Football League. Turner believed that his disease had been caused, at least in part, by all the hits he took on the field and is said to have agreed to donate his brain and spinal cord for research after his death, according to the Los Angeles Times.

“Football had something to do with it,” he said in 2011 when discussing his condition. “I don’t know to what extent, and I may not ever know. But there are too many people I know that have ALS and played football in similar positions. They seem to be linebackers, fullbacks, strong safeties. Those are big collision guys.”

Turner went on to say that he wouldn’t have played had he known the risks at the time. “If they would have come to me and said, ‘I’ve seen the future. This is what happens,’ of course, I would stop playing immediately,” he revealed. “But, as we all know, nobody can see the future. For me, it just falls into a long line of bad decisions.”

In 2014, he told the New York Times: “I remember times when I went back into games when I shouldn’t have. I wasn’t given all the information to make that decision for myself.”

Because of his age at the time of the diagnosis, Turner stood to receive $5 million from the case against the NFL. That money will now go to his family once all appeals in the case are exhausted, according to the New York Times. (The U.S. Court of Appeals for the Third Circuit heard oral arguments in the appeal in November; judges have yet to rule.)

Turner’s battle with ALS was the subject of 2012 HBO documentary “American Man” and a music video for the song “Journey On” by Ty Herndon.

He is survived by his former wife and three children. His son Nolan, 18, committed to play football at Clemson for Dabo Swinney, an Alabama teammate of Kevin Turner.

Many of Turner’s former teammates and friends paid tribute to him via Twitter on Thursday.

Prayers and blessing go out to a former teammate of mine Kevin Turner, unfortunately he passed away. Great mentor and friend. KT we miss you

In Jamaica & just got news on Kevin Turner, devastated. Rest in peace my good friend. Played the guitar & made me love the Eagles. Love KT

R.I.P Kevin Turner. You were a helluva teammate. Until we meet again… https://t.co/8dEgeJ1bhj