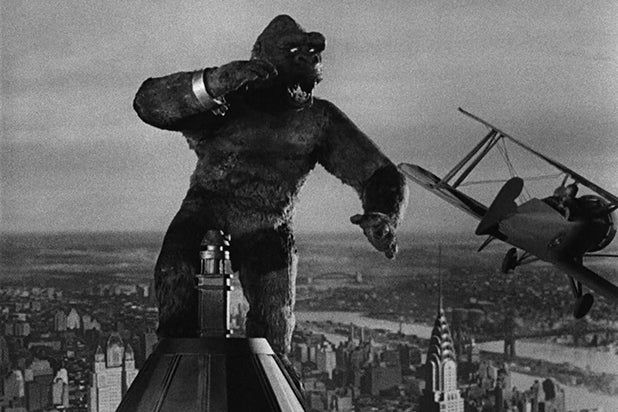 “King Kong” will roar onto Broadway in fall 2018 in a new play with music, producers Global Creatures and Roy Furman announced Wednesday.

The production, which features giant animatronic versions of the great ape, will play the Shubert Organization’s Broadway Theatre — where the current revival of “Miss Saigon” is expected to depart for a North American tour.

Jack Thorne, who received the 2017 Olivier Award and the Evening Standard Award for Best Play for “Harry Potter and the Cursed Child,” wrote the script for “King Kong,” which is a contemporary take on the classic story based on Merian C. Cooper’s original novel and the 1933 screenplay.

The production features a score by four-time Grammy nominee Marius de Vries and songs by Eddie Perfect (composer and lyricist for the upcoming “Beetlejuice” musical).

Drew McOnie, an Olivier Award winner for the London production of “In the Heights,” will direct and choreograph.

Pioneering creature designer Sonny Tilders developed Kong for the show, bringing together the worlds of animatronics and puppetry.

“I’m thrilled that ‘King Kong’ will be coming to Broadway next season led by Drew McOnie and Jack Thorne, who will bring a new dimension to the telling of Kong’s story,” Global Creatures CEO Carmen Pavlovic said in a statement. “Drew’s physical world will allow Kong to live in ways we never thought possible, propelled by Jack’s text and the score and songs written by Marius de Vries and Eddie Perfect.”

“‘King Kong’ is a quintessential New York story and I’m proud to be involved in this historic production,” Furman said. “Our team is creating a theatrical experience that we hope will astound audiences, while delighting them with its heartfelt storytelling.”