He’s curved and white-haired, and he talks a little funny. But Kirk Douglas, at 93, stole the show at the Britannia Awards on Thursday night. It was the first black tie event of the awards season and hopefully not the last Hollywood will see of the star of “Spartacus.”

Recognized for his contribution to world cinema, Douglas was charming and delighted and delightful. Despite the 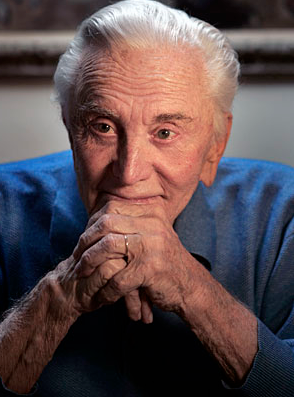 vestiges of a stroke on his ability to speak, he gamely quipped to Governor Arnold Schwarzenegger, who introduced him, that he was glad “Maria let you out of the house.”

The actor was the first of the evening to win an award, whose other honorees were filmmaker Danny Boyle, actress Emily Blunt, Colin Firth for his humanitarian work and the legendary Robert De Niro.

As is the way of Hollywood, all were quite deserving, but they also had movies to promote – “Young Victoria” for Blunt, “A Single Man” for Firth — and nominations for which to be positioned this season.

And then there was the elfin Douglas, who literally danced his way up to the podium to accept his award, and who three times brought the glittering crowd to its feet with his wit and verve.

The final ovation came when Douglas – who wished aloud that his friend Burt Lancaster were still around – set out to sing “London Town,” which he did, and many in the room sang along with him.

When he finished, he’d won everyone over, and left the crowd the memorable image of a unique, enduring movie star.