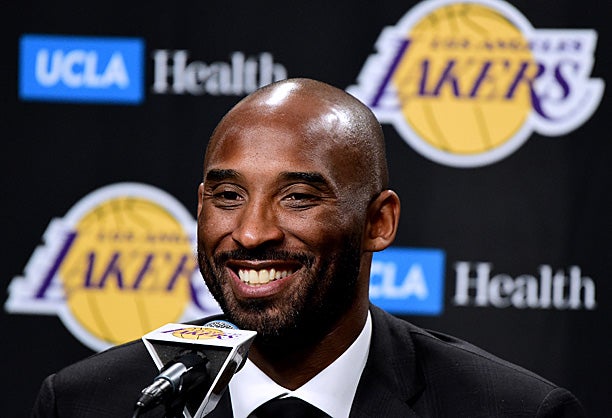 Kobe Bryant’s 20 years playing for the Los Angeles Lakers were honored on Monday in a star-filled journey down NBA memory lane.

The 18-time NBA MVP had not one but two jerseys immortalized at the Staples Center in downtown Los Angeles, as both his No. 8 and No. 24 jerseys were hung from the rafters.

When asked which jersey he preferred, the Lakers legend replied: “I kind of go back and forth. Eight has something that 24 will never, ever, ever, ever have, and that’s the ability to grow hair. So it’s tough,” he said, according to USA Today.

Also Read: 'Dear Basketball' Makes the Shortlist -- Will Kobe Bryant Get to the Oscars?

“I think 24 was more challenging, and I tend to gravitate to things that are harder to do. Physically for me, it was really, really hard to get up night in and night out. It was a grind,” Bryant added.

Bryant changed from wearing No. 8 to 24 at the beginning of the 2006-07 NBA season so that he could resume wearing his high school number, which was previously unavailable.

In honor of the jersey retirement, which came 20 months after Bryant’s retirement from professional basketball, a flood of famous names professed their praise on Twitter.

“Forever immortalized through the yelling of his name every time someone shoots a crumpled paper ball towards a garbage can. Truly Legendary,” Houston Texans’ JJ Watt wrote.

Meanwhile Shaquille O’Neal — who was once Bryant’s greatest nemesis — also came out to join in the celebration and offer his congratulations.

Since he hung up his (Nike) basketball shoes, Bryant has increasingly turned his attention to Hollywood. His animated ode to the game titled “Dear Basketball” is now available on go90, Verizon’s Yahoo Sports, AOL and Complex platforms.

The film brings together three distinct legends, with renowned animator and film director Glen Keane and Academy Award-winning composer John Williams joining Bryant, who is executive producer and narrator. The five-minute short (below) takes viewers on one little boy’s journey from hoop dreams to basketball greatness serving to inspire the next generation to follow their dreams.

See the congratulatory tweets for Kobe below:

Forever immortalized through the yelling of his name every time someone shoots a crumpled paper ball towards a garbage can.
Truly Legendary. #Kobe

You deserve this one and all the recognitions in the world. Thank you for bringing so much to the sport of basketball #brother!

I never got to go up against Kobe wearing #24 but it was a joy watching him thrive in an offense I knew so well. ????#Ko8be24 pic.twitter.com/19JABzOgjl

Kobe Bryant retiring two numbers tonight? That’s not done everyday. This legend is the one who got me into basketball when I was young and it’s carried as a passion ever since. Thank you for 20 season of galvanizing moments. From 8 to 24, to 81 and 60 in the last game. #Ko8be24 pic.twitter.com/qexLdbaVCm

Kobe and Bill Russell. What a moment. pic.twitter.com/ZUJt5iQuSJ