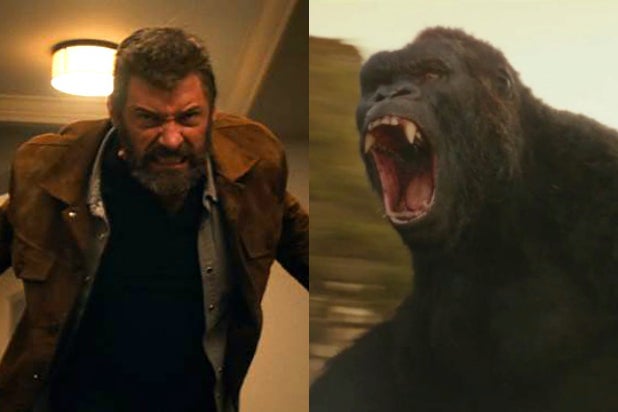 This weekend, analysts are expecting a box office battle between Fox’s “Logan,” which made $88.5 million in its opening last weekend, and Legendary Pictures’ “Kong: Skull Island,” a monster film the studio hopes will spawn a successful cinematic universe connecting the famed primate to his equally monstrous peer, Godzilla.

Independent trackers are currently estimating that “Kong” will make between $45-50 million in its opening weekend. For “Logan” to hold on to the top spot, it will likely need to keep its second week drop-off below 45 percent. Unfortunately for Fox, the fortunes of recent “X-Men” films show that history is not on their side.

What’s more, “Kong” is getting solid early reviews, currently clocking in at 78 percent on Rotten Tomatoes. If positive reviews keep coming in, it could help “Kong” reach the upper end of those projection limits. IMAX screenings could also help “Kong” this weekend the same way it helped “Logan” last weekend. The comic book movie made $10 million domestically from IMAX screenings along with another $10.6 million overseas. The appeal of seeing a larger-than-life creature in IMAX could be enough to get moviegoers to pay a few extra bucks for a premium screening.

Still, “Logan” has the added appeal of being Hugh Jackman’s final Wolverine film, which director James Mangold has used to create a film that critics have praised for its moving character moments and dark, dramatic flair that separates it from its predecessors. Some analysts think that the strong praise and emotional resonance that “Logan” has achieved with critics and Wolverine fans alike might be enough to get it another weekend win.

“It could be really close this week,” says comScore’s Paul Dergarabedian. “If ‘Logan’ didn’t get the massive reception that it did, then ‘Kong’ would be a shoo-in. But I think the great social media buzz is going to help ‘Logan’ hold on. Even if the drop is around 50 percent, that’s still near the low end of what ‘Kong’ is expected to make. So it’s going to be interesting to see how this weekend plays out.”

“Kong: Skull Island” puts a new spin on the tale of how humans discovered the mysterious Skull Island and the ape who rules over it. The film takes place in 1973, where a secretive government organization called Monarch funds a military expedition to the island to discover its secrets. There, the team finds a WWII lieutenant (John C. Reilly), who has been living on the island with natives for 28 years and knows about the unending battle between Kong and the “skull crawlers,” a race of hostile giant reptiles who wiped out Kong’s species. As the expedition crew struggles to survive, some begin to realize that Kong is a monster worth protecting.

“Kong” is the only major wide release due up this weekend, but the specialty market will see two critically-praised newcomers get a limited release. First is “Raw,” the directorial debut of French filmmaker Julia Ducournau. Released by Focus World, the disgusting body horror film has earned rave reviews with an 89 percent RT rating.

The film stars Garance Marillier as Justine as a strict vegetarian who finds herself forced to undergo grueling hazing rituals as she starts her studies to be a veterinarian. One of these rituals pressures her into eating a rabbit’s kidney, after which she becomes a voracious carnivore. But soon eating animal parts is not enough, and Justine starts developing a taste for human flesh.

CBS Films and Lionsgate will release “Sense of an Ending,” a film adaptation of James Barnes’ award-winning novel of the same name. The film stars Jim Broadbent as a reclusive retiree who recalls how a turbulent relationship he had with a girl in his college years led to one of his friends committing suicide. Forty years later, he crosses paths with that old flame (Charlotte Rampling), which forces him to confront the lies he has told himself while recollecting his past. Directed by Ritesh Batra, the film has an 88 percent rating from 8 reviews on Rotten Tomatoes.