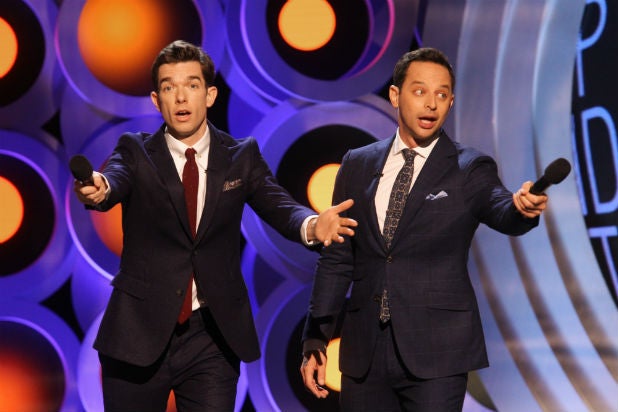 During the opening monologue of the Independent Spirit Awards Saturday, hosts Nick Kroll and John Mulaney did not tiptoe around the numerous Hollywood men accused of sexual misconduct.

In a Hollywood climate that has promoted accuser empathy and largely avoided direct public mentions of figures like Harvey Weinstein and Kevin Spacey, the hosts gleefully took jabs at the disgraced men before a crowd that included Jordan Peele, Greta Gerwig and Salma Hayek.

Mulaney shared a story about meeting with Weinstein in 2015.

“He was complaining to me in the meeting that The Weinstein Company TV took up too much of his time,” Mulaney said, recalling that Weinstein told him, “No one is going to remember my movies. Forget ‘Pulp Fiction,’ my tombstone is going to say ‘Project Runway.'”

Mulaney joked that Weinstein shouldn’t worry about the reality fashion competition that TWC produces. Thanks to his sexual assault and harassment scandal, Mulaney said that Weinstein’s tombstone will now read “Unmarked XXL Grave. “

Some in the audience cringed as the camera immediately cut to Elizabeth Olsen, star of the TWC awards hopeful, “Wind River.” It took a few seconds of flop sweat, but the joke wound up getting applause.

Kroll then pivoted to movie producer Brett Ratner, who, in November, was accused of misconduct by numerous women.

“If you’ve ever had the pleasure of meeting Brett Ratner, you’d know he’s constantly scratching his balls,” Kroll said of working with the “X-Men: The Last Stand” producer years ago on a pilot shoot.

“One day on set he was really going to town on his sad sack,” Kroll remembered. “We watched him walk away, and walk over to the craft services table where he then touched about six donuts. Then he grabbed one and walked away. If that’s the way the guy treats donuts?” Kroll said.

The names kept coming. Here’s what the duo had to say about more men accused in the #MeToo movement:

“A lot of people are asking if you separate the artist and the man,” Mulaney said. “Like Woody Allen and his last 20 unwatchable movies. Can we still not watch them?”

“That’s like if a guy s—s his pants and, to fix the problem, put on cuff links,” Mulaney said.

Referencing Spacey’s widely panned decision to come out of the closet as gay while denying any memory of misconduct with 14-year-old Anthony Rapp, Kroll mocked Spacey as saying:

“So to sum it up, ‘I’m connecting being gay with assaulting a minor. And now to let the congratulations notes roll in.'”

“Yeah that sounds like me, I bet I did that,” Kroll said, impersonating the TV chef accused of harassment within his restaurant businesses. “By the way, pizza dough cinnamon rolls are easy to make. Mamma mia! That’s a spicy apology!”