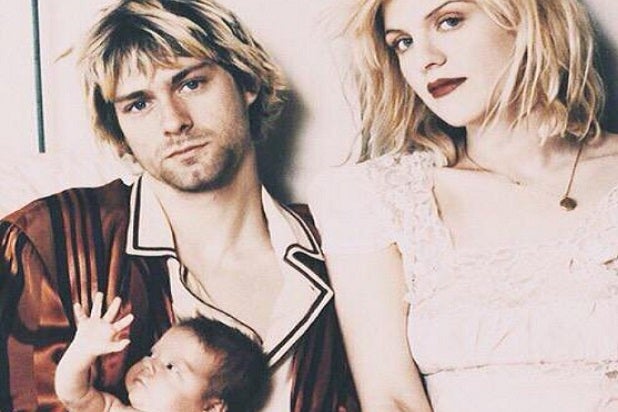 Kurt Cobain got a digital Christmas card from Courtney Love over the holiday weekend.

The Nirvana frontman’s widow took to Instagram to share a festive moment she could “never forget” with her deceased husband and daughter, Frances Bean Cobain.

“That Christmas moment in everyones lives that you never forget, the one that makes you feel on top of the world, where the greatest gifts are the loved ones you shared that moment with. Well this is mine, I’m grateful to have ever experienced that moment,” Love wrote.

Also Read: Courtney Love Blasts Kurt Cobain in Anguished Message: 'What on Earth Were You Thinking?'

Cobain’s life and death were the subject of two very different documentaries released this year. Filmmaker Brett Morgen directed “Montage of Heck” with support from both Love and Bean, the latter of whom served as an executive producer on the HBO release that used Cobain’s artwork, private journals and audio to give audiences an intimate look at his life.

Benjamin Statler’s “Soaked in Bleach,” which is currently available to stream on Netflix, took a distinctly different approach that Love was not fond of. Using a mix of talking heads and dramatic re-creations of recorded interactions, the film centers on private investigator Tom Grant’s experience working for Love to track down Cobain before he was found dead in his Seattle home on April 5, 1994.

It adds more fuel to suspicion that the rock star was murdered, as opposed to the Seattle Police Department’s conclusion that Cobain committed suicide.

Love attempted to prevent theaters from screening it over the summer by sending “cease and desist” letters to exhibitors.

“In addition to defamation per se, the false accusations contained in the Film provide Ms. Cobain with valid claims for negligent and intentional infliction of emotional distress, false light, and tortious interference with business, among others,” the document read. “For years Ms. Cobain has been publicly subjected to threats based on the same kinds of baseless theories that appear in the Film, and dissemination of the Film would only exacerbate the risk that she will suffer further emotional and financial harm.”

Take a look at Love’s Christmas memory below:

That Christmas moment in everyones lives that you never forget, the one that makes you feel on top of the world, where the greatest gifts are the loved ones you shared that moment with. Well this is mine, I’m grateful to have ever experienced that moment. Merry Christmas Kurt, the greatest true love I’ve ever experienced in my life. You gave me the gift that makes life worth living, our incredibly talented, loving, beautiful and gifted daughter Frances Bean Cobain. Merry Christmas Bean, love mom and dad