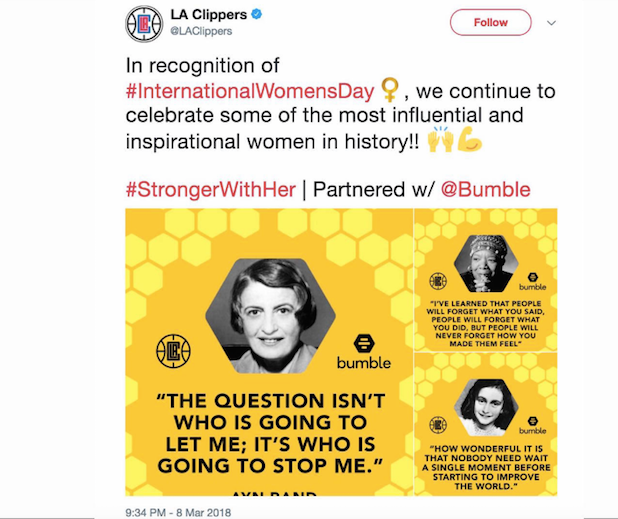 Many people paid tribute to International Women’s Day on Thursday with well-intended posts of influential women. The Los Angeles Clippers hopped on the hashtag train as well, but the result was less-than-ideal for the team.

The NBA franchise recently announced a partnership with dating app Bumble where the company’s logo would be featured on team uniforms. In honor of International Women’s Day, the Clippers tweeted an image featuring Ayn Rand, Anne Frank and Maya Angelou … but the post appeared to be partnered with Bumble.

The tweet, which was removed about 90 minutes after it was initially sent, included quotes from all three women, but that didn’t stop people from criticizing it. The misstep harkens back to the team’s bumbling days under previous owner Donald Sterling.

Reps from Bumble and the Clippers didn’t immediately respond to TheWrap’s request for comment.

congrats to the *spins game show wheel* los angeles clippers and their partnership with *tosses darts at wall chart* bumble on celebrating the life of *throws my lifeless body into the ocean* ayn rand! pic.twitter.com/GiJA6ZnxJG

the clippers really tried anne frank brought to you by bumble i feel a bit faint pic.twitter.com/UtywVXH9KK

The Clippers and Bumble could have, oh, I don’t know, celebrates women’s basketball players or something like that on International Women’s Day. But sure, I guess commercializing the powerhouse trio of Ayn Rand, Maya Angelou, and Anne Frank is another way to go.

Peter Thiel gets to town and boom – everything changes https://t.co/THrfR6DE2W

The LA Clippers (that's a basketball team, non-Americans) combined a 16-year-old who was murdered in Bergen-Belsen and a dating app to 'celebrate' #IWD2018. Oh, and Ayn Rand and Maya Angelou. pic.twitter.com/0uSZulRQo0

12 Times People Got Roasted on Twitter by Sassy Corporations, From MoonPie to Taco Bell (Photos)

“Buddy it’s saturday (sic) night and you’re talking to a marshmallow sandwich on the internet,” one critic is told

MoonPie is the latest company to bite back at critics on social media, recently battling two Twitter critics. "Youre (sic) time is wasted managing a social media account," one user wrote, to which MoonPie replied: "Buddy it's saturday (sic) night and you're talking to a marshmallow sandwich on the internet." Ouch. See which other corporations have delivered sharp-tongued responses.