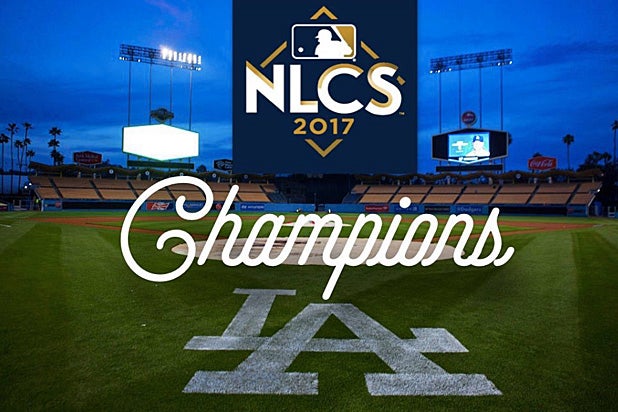 The Chicago Cubs had their year — and 2017 wasn’t it. This time, it was the L.A. Dodgers who broke a drought by winning the National League pennant and heading to the World Series for the first time in 29 years.

The Dodgers took down the Cubs 11-1 and won the series 4-1 in what can only be called a domination. And they did at Wrigley Field, to really rub salt into the wound.

Enrique Hernandez’s three home runs led the Dodgers to their happy ending and gave them the opportunity to face either the Houston Astros or the New York Yankees in the World Series. The Dodgers were last there in 1988 when they beat out the Oakland Athletics.

While Chicago mourned, there was plenty of celebrating in Hollywood. L.A. Lakers president of basketball operations Magic Johnson watched the Dodgers seal the deal as his own team took to the court for their opening 2017 NBA season game.

So proud of the @Dodgers players, they left everything on the field tonight. We're World Series bound!

Then Magic remembered who he was meant to be cheering for …

Rob Lowe gave his seal of approval of the Dodgers’ lineup in true “West Wing” style.

See other tweets below.

Last time we went to World Series, gas was 91¢, the Dow was at 2126, movies were $3.50, and people were dressed like this. #thisteam EG pic.twitter.com/ueQzqpSm1V

I've got lots of love for the @Cubs and I'm so happy for the @Dodgers! I guess I have to start watching baseball now. #ThisTeam

Celebrities like Ken Jeong, Eva Longoria and George Lopez are rooting for #ThisTeam

Celebrity fans have turned out in spades to cheer on the Dodgers as they go up against the Houston Astros in the team's first World Series in 29 years.