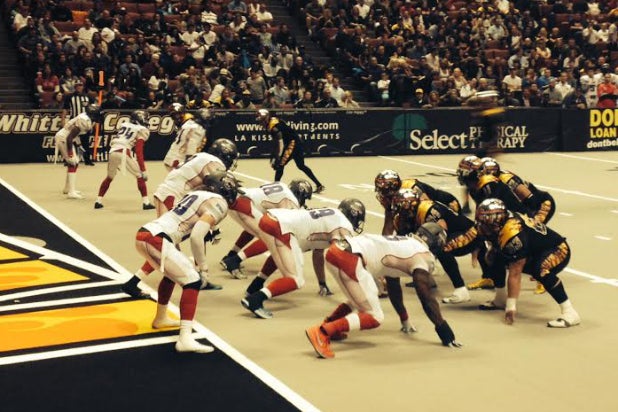 After a very long wait, professional football is back in Los Angeles — kind of.

The Arena Football League’s LA Kiss (2-1) made its home debut in Anaheim’s Honda Center on Saturday, and as one might expect from a team owned by Kiss members Gene Simmons and Paul Stanley, the game felt as much like a rock concert as a football game.

Heavy-metal band Steel Panther played the pre-game and halftime shows, and played during a TV timeout from a stage behind one of the endzone’s goalposts. Women pole-danced in cages suspended over the field.

Two players, Donovan Morgan and Andre Jones, were brought down via elevator platforms in pre-game introductions as more acrobatics and pyrotechnics filled the indoor arena. The national anthem was of the guitar solo variety, performed by the LA Kiss house band’s lead guitarist — because they have one of those.

Lemmy from Motorhead oversaw the opening coin flip. But it was a Kiss show through-and-through.

Before the game, Stanley and Simmons took to midfield — which looked like a giant Kiss guitar pick, of course — to hype up the crowd.

“Tonight is a game-changer, literally,” Stanley said. “There’s no reason Los Angeles… should be without great football.”

Stanley added that families shouldn’t have to “mortgage their houses” to watch great football and take in bonus entertainment — a shot at the much more popular (and expensive) National Football League.

Simmons didn’t have much to add, aside from his usual brooding.

Los Angeles struck first, courtesy of a slant pass from J.J. Raternik to Morgan. The duo would combine for several more scores throughout the night.

Heading into the contest, the home team was 1-1, while visiting Portland Thunder (0-3) — also a first-year team — was still looking for its first victory following two straight losses to start the season. The visiting team would leave the building still winless. Both squads were coming off a bye week.

Saturday’s game was televised by CBS Sports and on the radio via ESPN3.