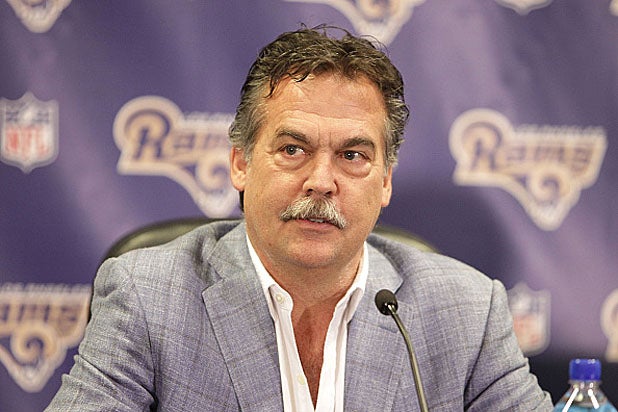 The Los Angeles Rams have relieved Jeff Fisher from head coaching duties after an embarrassing 42-14 loss to the Atlanta Falcons over the weekend.

The Rams, who returned to L.A. this season after 22 years in St. Louis, have been a disappointment across all areas of the team and currently have a 4-9 record.

“This is the right time to make a change as our performance has not lived up to my or our fans’ expectations. We all are focused on improving as an organization and building a team that makes Los Angeles proud. Our mission is to celebrate a Super Bowl title with our fans in Los Angeles. Today is the first step to bringing us closer to that goal,” Rams owner E. Stanley Kroenke said in a statement. “Making a decision such as this, especially during the season, is one of the most difficult in sports.”

Kroenke continued: “He has worked tirelessly despite some challenging circumstances. He played an integral role in helping this team make history in returning the NFL to Los Angeles, and we always will be grateful for his commitment and dedication to our organization.”

Fisher’s job security emerged as a punchline around the league as it appeared he was safe despite constant disappointments on the field.

Fisher, who is an L.A. native and attended USC, played for the Chicago Bears from 1981-1985. He started his coaching career as an assistant in Chicago, eventually earning a gig as the Philadelphia Eagles defensive coordinator in 1988.

He was the head coach of the Houston Oilers, which relocated to Tennessee and became the Titans, from 1995 until 2010. After being let go by Tennessee, Fisher consulted at the NFL headquarters in New York until the Rams hired him in 2012.

Fisher was also a prominent figure in the recent season of HBO’s “Hard Knocks.”