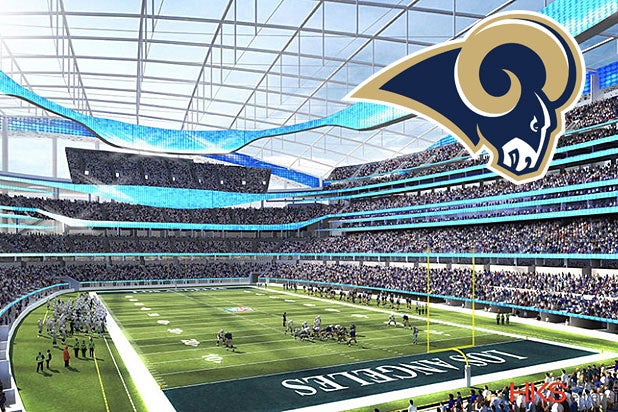 The Los Angeles Rams are set to be this summer’s NFL team profiled on HBO’s “Hard Knocks.”

“Ray Donovan” star Liev Schreiber will narrate the annual training camp documentary this time around, which will revolve around the team as it returns to L.A.

“We are thrilled that the 11th edition of ‘Hard Knocks’ will spotlight a team from the NFC West Division for the first time,” Peter Nelson, executive vice president of HBO Sports said. “It’s exciting to chronicle a franchise with so many compelling storylines, highlighted by the team’s return to the Los Angeles market and the enormously warm reception the Rams are experiencing.”

Cameras are already rolling as the series is set to document the Rams’ homecoming. It will focus on the daily lives and routines of players and coaches as the Los Angeles Rams, who compete in the powerhouse NFC West division, conduct the franchise’s first training camp in Southern California since the team’s 1946-1994 tenure there.

“From the moment it was announced the Rams would be returning to the Los Angeles market, this franchise felt like a natural for the next season of ‘Hard Knocks,'” said Ken Rodgers, coordinating producer of NFL Films. “We look forward to capturing the move to Southern California, training camp and everything in-between.”

A 30-person NFL Films crew will be at the Rams’ training camp at team headquarters in Southern California, shooting more than 1,500 hours of footage over the course of the series. Camera and sound crews will have unencumbered access to the players’ and coaches’ meeting rooms, training rooms, living quarters and practice fields.

It was revealed in January that the St. Louis Rams will return to the L.A. area to play in a new stadium to be built in Inglewood, California.

The Rams have agreed to pay the league a relocation fee of $650 million, stretched out over about 20 years. The team will most likely play at the Los Angeles Memorial Coliseum (home of the USC Trojans) until its new stadium is built, which is projected to be in 2019.