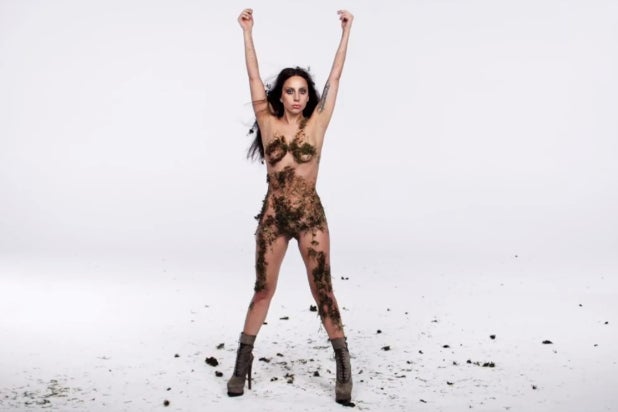 Lady Gaga has rarely kept her clothes on while promoting her album “ARTPOP” — and the new short film for the title track is no nudity exception.

“This album is a celebration: My pain exploding in electronic music,” a Gaga voiceover says during opening of clip. “It’s heavy, but after I listen to it, I feel happy again, I feel lighter.”

When the two-minute, 38-second film fades in, the pop star is actually clothed — but that lasts a very brief period of time.

From there, Gaga goes through various peculiar costume changes, including one with some strategically-placed dirt on her otherwise naked body. At a later point, the pop star gyrates on the ground in a bra and underwear. In others, she sports a shaved head, cries angrily and generally does a heck of a lot of teeth baring throughout.

We assume the scenes are a comment on the state of pop culture, just not sure what the monocle and flashlight-in-her-mouth looks are all about.

While “ARTPOP” is the No. 1 album in the country, its 258,000 opening week sales number is nowhere near those of Gaga’s prior album, “Born This Way,” which debuted to 1.1 million units moved. Last week, Eminem‘s “Marshall Mathers LP II” opened atop the charts, selling 792,000 copies.