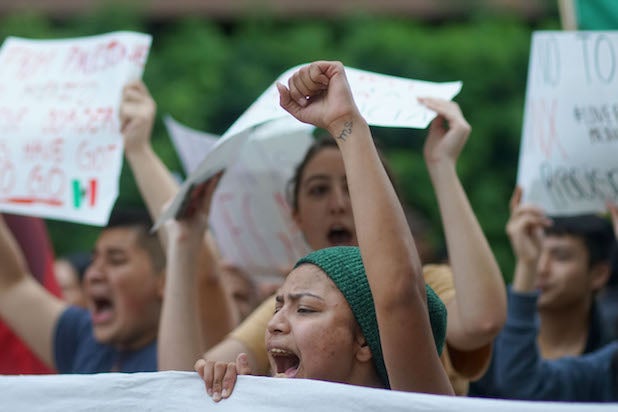 Law enforcement in Southern California is bracing for “Trumpageddon,” as President Trump makes this first visit to the Golden State since taking office.

“The LAPD will be heavily deployed throughout the city to ensure the safe transport of the president and secure locations he will be visiting,” a Los Angeles Police Department spokesman told TheWrap in a statement.

The LAPD said it’s working closely with local, state, and federal law enforcement partners to prepare for the visit.

“While the department is well rehearsed at dealing with presidential visits, every administration brings with it unique challenges and new protocols, and unfortunately out of an abundance of caution many details about this visit are being withheld for security reasons,” the spokesman said.

The Los Angeles County Sheriff’s Department told TheWrap it is helping coordinate between the U.S. Secret Service and local law enforcement and will offer support in case things get out of hand.

“If anything happens we have deputies ready to respond,” a spokeswoman told TheWrap.

The Sheriff’s Dept. said it will be supporting the Secret Service by monitoring news reports as well as social media for any possible unplanned demonstrations and providing personnel on an as-needed basis.

The Beverly Hills Police Department told TheWrap that the president’s motorcade would not be coming through the city’s jurisdiction, despite multiple reports that Trump’s scheduled fundraiser was to be held in the Beverly Hills area.

According to BHPD Sgt. Chris Coulter, the planned fundraiser has a postal address in Beverly Hills, but that the actual location of the fundraiser falls within the LAPD’s jurisdiction.

Details of the Trump visit have been scarce. Before the fundraiser, Trump is scheduled to inspect prototypes for a border wall in San Diego before heading to Los Angeles.

The BHPD said it was bracing for at least one protest along Beverly Gardens Park on Santa Monica Blvd. between 4 and 8 p.m., organized by Facebook group “Trump Not Welcome in LA.”

“We call on ALL organizations who stand against fascism, imperialism, capitalism, racism and all forms of hatred to join this action! We will release more information soon!,” the group wrote on its site. At least one more protest is expected. An “Unwelcome Rally at Santa Monica Airport Park” is set for 2 p.m. at Santa Monica Airport, according to the Los Angeles Times.

“We have extra resources allocated for the event,” BHPD Sgt. Coulter said. “but we don’t know yet how many people will arrive.”

Coulter also said that the department has intelligence units monitoring social media “as we speak.”