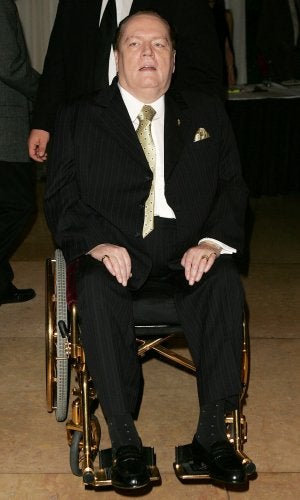 Busloads of children lined up outside the Ahmanson Theater this morning for a special performance for “Mary Poppins,” while down Temple Street quite another show was taking place for grownups.

Today Dustin came off a little Captain Queegish on the witness stand. When Hoffman asked what he did for a living, Dustin drawled, “I have uh, sought work in the adult entertainment industry.” His artistic goal, he claimed, was nothing less than to “bring back the class and elegance of classic erotica. I feel it’s been cannibalized by compilations and gonzo footage.”

“I’ve created a good reputation,” he said. “A movement – a movement across the country through my personality.”

Hoffman: Do you believe you’re a celebrity?

Hoffman: Are you famous to the general public?

That fame, however, was put to a bitter test at the Las Vegas Hard Rock Café last year, when a launch party for their Flynt Media Corp. that Dustin and Jimmy Jr. hosted during the Adult Video News Awards drew only 10 guests.

Small ironies abound in Room 14. The trial is dominated by pornography but none is projected on screens in Judge Howard Metz’s courtroom – the eight jurors view the naked evidence from a big flat screen placed to the side of the jury box. The rest of us have to crane our necks to view the laptops of the two legal teams.

Judge Matz often appears impatient with Flynt v. Flynt’s pace and has taken steps to move things along. One of them came just before lunch recess, when he told counsel he wishes to discuss jury instruction after today’s testimony.