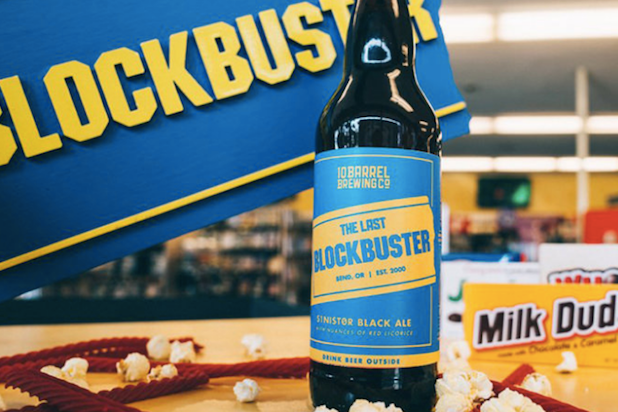 It looks like Blockbuster is drowning its sorrows in its very own beer.

The last Blockbuster store in the U.S. — in Bend, Oregon — has partnered with 10 Barrel Brewing Co. to bring a new beer to nostalgic cinephiles. The beer, labeled a “black ale with nuances of red licorice” is called “The Last Blockbuster” and will be introduced to the public Sep. 21 during a party at the Bend store.

“The Last Blockbuster” will be available in the six 10 Barrel locations — including two in Bend — for a limited time. The other four are in Denver, San Diego, Boise, Idaho and Portland, Oregon.

10 Barrel promoted the new brew Monday on their Twitter:

We brewed a beer with the last Blockbuster in America. Check it out. #bend #blockbuster https://t.co/aIs6NeG5fP pic.twitter.com/AGi39aGC4W

The Blockbuster in Bend became the sole location after two Blockbusters in Alaska shuttered their doors in July. In addition to housing the last Blockbuster, Oregon is notorious for being the microbrewery capital of the U.S., making the marriage of the two rather appropriate.

11 Movies to Get You Pumped to Party (Photos)