According to the New Testament, Jesus was led into the wilderness to be tempted by Satan for 40 days. During that time of fasting and prayer, Jesus sought the presence of God and sparred with the Prince of Darkness as preparation for ministry and an eventual sacrificial mission. Details related to this story, though significant — Jesus rebukes the Devil and makes it through, unscathed — are also fairly sparse.

It’s that empty, speculative space that entices writer-director Rodrigo Garcia (“Nine Lives,” “Albert Nobbs’) to invent a new obstacle for Jesus (Ewan McGregor, called “Yeshua” here) in “Last Days in the Desert,” as he wanders and struggles to make sense of his purpose.

A stoic, altar-building father (Ciaran Hinds, “Game of Thrones”), a dying mother (Ayelet Zurer, “Daredevil”), a restless teenage son (Tye Sheridan, “Mud”), and all of their attendant problems, wait on a cliffside for Yeshua’s intervention. They also serve as parable fodder, types inserted into a never-ending story about generational tension between fathers and sons, freedom and obligation.

Whatever travel plans the nascent Messiah has in mind are put on the back burner upon meeting this troubled family. He stops for the night and stays on. He breaks rock with the father. He helps to build the altar. Most importantly, he listens to the son’s adolescent anguish about his own solitary and dutiful plight: the boy wants to leave home, strike out on his own, and create a future for himself. But the stern father’s expectations crush his hopes. Yeshua tends to stay out of it, offering kind words of wisdom here and there, but otherwise leaving any hope of resolution in the hands of the family themselves.

It’s not like he doesn’t have problems of his own, after all. Yeshua’s other, and much more arduous, task involves arguing with and resisting Satan (also played by McGregor). The demon snaps and snipes, conjures tempting visions of the mother as sexual enticement, and, most importantly, plants nagging doubts in Yeshua’s mind about his own relationship with God. “He loves himself only,” Satan snarls, digging in deep and withering Yeshua’s resolve. 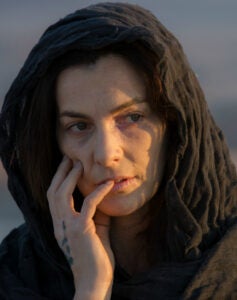 The insults and irreverent asides about the mysterious plans Yeshua’s unseen creator has in store turn uglier when Satan suggests that Yeshua’s very existence is a game played by God, one that can be stopped, started, and repeated endlessly for the callous deity’s own amusement. This back and forth debate, Yeshua’s verbal battle with nihilism, forms the spine of the action, the only noise generated in an otherwise muted travelogue. McGregor, as tormentor and tormented, makes a fine figure of anger and melancholy, carrying the entire weight of the film’s slim story.

Cinematographer Emmanuel Lubezki (“The Revenant”), meanwhile, engulfs the five characters with his camera, situating them in a harshly beautiful landscape (California’s stunning Anza-Borrego Desert State Park stands in for the Middle East), tiny figures against an unforgiving and seemingly endless expanse of rock and sand.

But this visual storytelling, its overwhelming narrative one of isolation, competes with and mutes the script’s obvious, and ponderous, parallels between the family strangled by rigid adherence to tradition, and Yeshua’s internal battle with his assigned destiny.

Also Read: 'The Revenant' Cinematographer on Violence, Bear Attacks and Those Brutal Locations

Garcia’s reluctance to go overboard supernaturally, and his commitment to relative good taste — save for one fart joke, not kidding — take an already lean parable and render it stingy, and the filmmaker seems not quite able to be spare while still communicating the anguish and sadness inherent in a story about fathers who sacrifice their own sons for selfish reasons, and sons caught between self-determination and obedience.

This impulse to do less, to avoid excess, is admirable — something the current wave of Conservative Evangelical filmmaking could bear to emulate — but in the end it reads as timid, eventually making “Last Days” feel small and insignificant, hobbled by its own restraint.

“What would Jesus do?” asks the t-shirt and the bumper sticker and the WWJD bracelet. The proper response, of course, depends on whom you’re asking. But here the answer is, “More.”