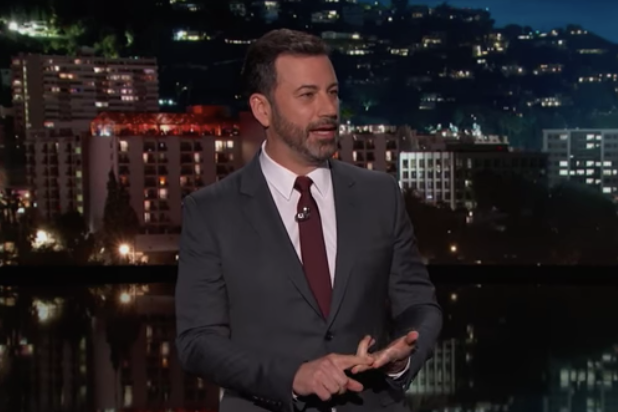 Late night hosts are used to taking on the topic of sexual misconduct in their monologues on days that end in Y at this point, and Wednesday night was no exception.

Following the announcement made Wednesday that longtime “Today” show host Matt Lauer had been fired by NBC News after a complaint of “inappropriate sexual behavior in the workplace,” hosts Stephen Colbert, Jimmy Kimmel, Conan O’Brien, Trevor Noah and Jimmy Fallon used their platforms to address the shocking news and, of course, President Donald Trump’s response to it.

“Wow, Matt Lauer was just fired from NBC for ‘inappropriate sexual behavior in the workplace,'” POTUS tweeted. “But when will the top executives at NBC & Comcast be fired for putting out so much Fake News. Check out Andy Lack’s past!”

Kimmel opened “Jimmy Kimmel Live!” by saying seeing Lauer’s name trending for sexual harassment is “better than him being dead” and wondering if Trump, who hosted “The Apprentice” on NBC, was aware that he too was accused of “inappropriate sexual behavior in the workplace” at the network. “Is he aware that he’s him? I don’t think he does.”

Kimmel also commented on the firing of “A Praire Home Companian” host Garrison Keillor over sexual misconduct accusations. “Can you imagine being fired from Minnesota Public Radio? It’s like having your library card revoked.”

Colbert noted in exasperation during his “Late Show” monologue that he is now “one of the few men still allowed on television” and called out Trump, who, of course, tweeted about Lauer’s firing, for even beginning to have an opinion on the situation.

“Listen up!” Colbert said. “You don’t get to comment. That is the pot calling the kettle at 3 a.m. and asking what she’s wearing.”

Fallon, whose “Tonight Show” airs on NBC, specifically addressed how Lauer’s firing affected the network’s annual tree lighting ceremony at Rockefeller Center, which went on without the “Today” show vet. “Also getting lit tonight, the HR rep over at the ‘Today’ show,” Fallon said.

Seth Meyers, whose late-night program is also on NBC, taped a day early, so Meyers’ monologue was sans Lauer references — for that night, at least.

Over on TBS, Conan joked the “Today” show’s setup, with fans watching from just outside the studio in 30 Rockefeller Center, had lead to Lauer’s downfall. “After Lauer said, ‘Maybe having all those people looking in the windows wasn’t such a great idea after all,'” Conan said, thinking as Lauer. “Maybe that was the problem.”

Noah also commented on Lauer’s firing on “The Daily Show,” counting him in with Bill O’Reilly, Charlie Rose, and Mark Halperin, and joked, “Soon we’ll have enough for a Perve News Network,” as a PNN logo — a riff on CNN’s icon — flashed across the screen.

James Corden did not address Lauer’s situation on “The Late Late Show,” instead focusing on Trump’s decision to tweet inflammatory anti-Muslim videos from a known British hate group, “Britain First,” on Wednesday morning.

The announcement that Lauer had been fired was made at the top of the “Today” show on Wednesday, which he joined full-time in 1994 as news anchor and then as co-host three years later. “I am heartbroken,” said Savannah Guthrie, who has served as co-anchor for the last five years.

You can see clips of how each host addressed the accusation posed against Lauer below.