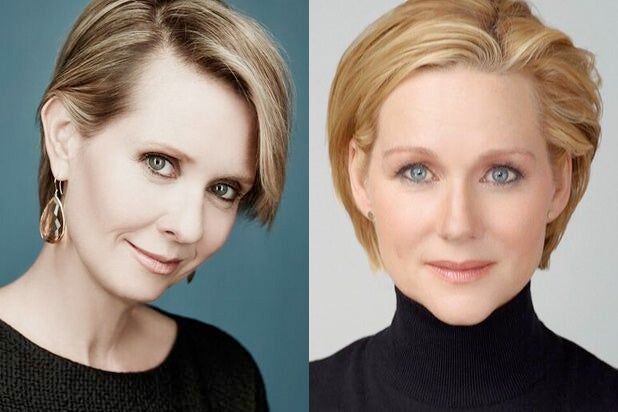 In a first for the nonprofit theater, the stars will alternate the 1939 drama’s two lead roles — dueling sisters-in-law Regina Hubbard Giddens and Birdie Hubbard in a strong-willed aristocratic Southern family.

The limited-run revival will be directed by Tony winner Daniel Sullivan and begin previews on March 29, 2017, in advance of an official opening on April 19 at MTC’s Samuel J. Friedman Theatre.

The schedule of which actress will play which role at each performance will be announced in spring 2017.

Sullivan has directed Linney to Tony nominations in both MTC’s Broadway premiere of “Sight Unseen” and MTC’s New York premiere of “Time Stands Still.” The actress was also nominated for a 2002 revival of “The Crucible.”

Sullivan directed Nixon to a Tony Award in MTC’s Pulitzer Prize-winning “Rabbit Hole.” The former “Sex and the City” star also received Tony nominations for “Indiscretions” in 1995 and “Wit” in 2012.

Set in Alabama in 1900, “The Little Foxes” follows Regina Giddens and her ruthless clan, including her sister-in-law Birdie, as they clash in often brutal ways in an effort to strike the deal of their lives.

This will be the fourth revival of Hellman’s 1939 play to hit Broadway and the first since a 1997 production starring Stockard Channing and Frances Conroy.