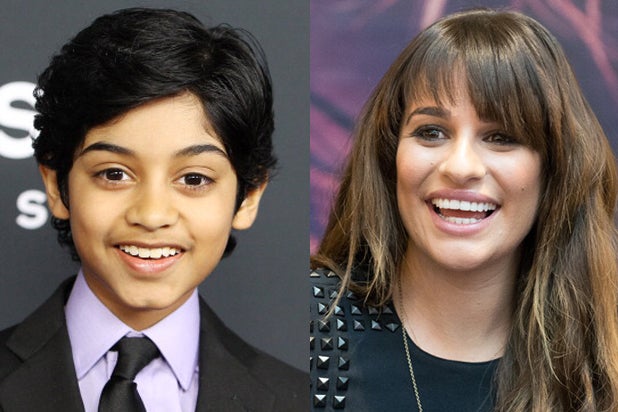 Representatives for DreamWorks Animation and Michele did not immediately respond to requests for comment.

Kevin Lima, the “Enchanted” filmmaker who also directed Disney’s “Tarzan,” signed on in July 2011 to direct from a script by Gurinder Chadha and Paul Berges, who previously co-wrote “Bend It Like Beckham” together.

DWA’s first Bollywood-style animated musical adventure is loosely based on the “Ramayana,” an epic Indian tale about a man whose wife is kidnapped by a demon king.

Also read: Lea Michele Is Having a Breakdown in ‘Cannonball’ Music Video

Story follows monkey brothers Raj and Deepu, the latter of whom is younger and will be voiced by Chand. When Raj accidentally releases the ten-headed demon king Ravana from his enchanted sleep, the demon kidnaps Bollywood superstar Chandani. The unlikely sibling heroes then team up with Chandani’s pet monkey Pinki and embark on a thrilling journey to rescue Chandani, save their city and defeat Ravana.

Michelle is in negotiations to voice the role of Pinki, though her deal has not closed yet.

Lisa Stewart and Chris Chase will produce, while A.R. Rahman (“Slumdog Millionaire”) and Stephen Schwartz (“Wicked”) are working on the film’s music and lyrics, respectively.

Michele, who is best known for playing Rachel Berry on Fox’s “Glee,” recently played Dorothy in “Legends of Oz: Dorothy’s Return” and appeared in Garry Marshall’s ensemble comedy “New Year’s Eve.” She also just released her first album, “Louder,” and has a book coming out next month titled “Brunette Ambition.” Michele is repped by WME and Untitled Entertainment.

Chand is a rising young star who currently stars opposite Jason Bateman in the raunchy comedy “Bad Words.” He got his start playing Adam Sandler‘s son in “Jack and Jill” and Damian Lewis’ student on Showtime’s “Homeland.” Chand also shared scenes with Mark Wahlberg in Peter Berg‘s “Lone Survivor.” He’ll soon be seen in DreamWorks’ adaptation of “The Hundred-Foot Journey.” He’s repped by Coast to Coast Talent Group, Paradigm and attorney Derek Kroeger.