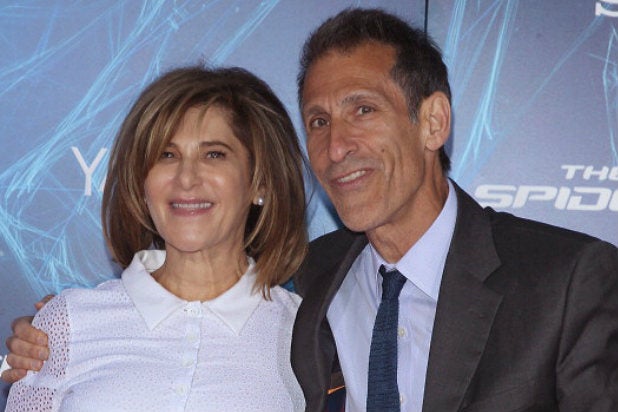 A document that purports to show the salaries of top Sony executives has leaked online, and it shows the top 17 moguls who make $1 million or more at the studio.

A week after Sony Pictures Entertainment was hacked by a group calling itself Guardians of Peace, or #GOP, a blogger at Fusion.net said he received a file containing the documents from an anonymous emailer.

He posted the spreadsheet of the top executives Monday, which reflected the pre-bonus $3 million salaries of both CEO Michael Lynton and co-Chairman Amy Pascal. The salaries of Sony Television chief Steve Mosko ($2.8 million), production chief Doug Belgrad ($2.35 million) and the co-chairmen of Sony Pictures Classics Tom Bernard and Michael Barker ($1 million each) were all listed as well. (Update: These salaries don’t reflect the executives actual compensation, which includes bonus cash, stock, warrants and many other perks. Here’s the full poop on how executives are actually compensated.)

The studio’s computer, email and entire phone system were paralyzed in the hacker takedown that started on Monday November 24 and which the studio only started to set right by Monday Dec. 1. The studio’s Twitter accounts were also hacked. While the studio set up a parallel system offline, there is apparently no solution that has been found to undo the attack or identify the attackers. However, the FBI has launched an investigation.

The attack by the self-designated “Guardians of Peace” has been brutally personal. Some PC computer screens at Sony showed a shocking image of the heads of studio CEO Michael Lynton and co-chairman Amy Pascal on a platter with scales of justice. As TheWrap previously reported, the hackers threatened to release private information from the studio if their demands were not met, but those demands were never made clear. They also did not specify a deadline and had not released information before now.

Here is the spreadsheet:

According to Kevin Roose at Fusion:

“The salary list is contained in a spreadsheet from the leak entitled “Comp Roster by Supervisory Organization 2014-10-21.” The spreadsheet appears to contain incredibly detailed data about the compensation plans of Sony Pictures employees, including those employees’ names, job titles, home addresses, bonus plans, and current salaries.”

Roose noted that the list of top salaried executives was 94 percent male, and 88 percent white.

Worse than that, it seems that there are no secrets that are safe at Sony Pictures Entertainment.