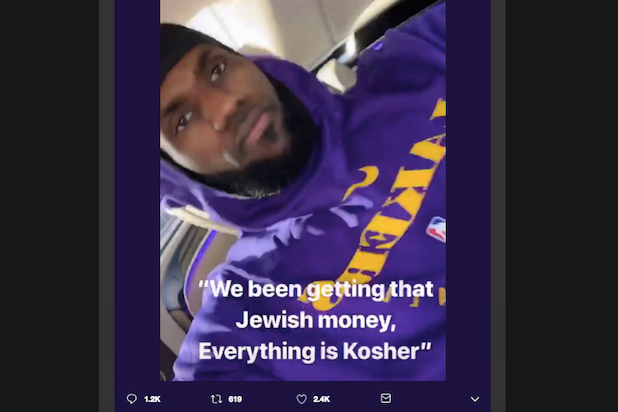 NBA star LeBron James offered an apology on Sunday after posting an Instagram story, that included text from him about “getting that Jewish money.”

“Apologies, for sure, if I offended anyone,” James told ESPN shortly after the Los Angeles Lakers lost to the Memphis Grizzlies.

“That’s not why I chose to share that lyric. I always [post lyrics]. That’s what I do. I ride in my car, I listen to great music, and that was the byproduct of it,” James added. “So I actually thought it was a compliment, and obviously it wasn’t through the lens of a lot of people. My apologies. It definitely was not the intent, obviously, to hurt anybody.”

In an Instagram story the day before, James had quoted from the song “ASMR” by the rapper “21 Savage,” and zeroed in on the lyrics, “We been getting that Jewish money, Everything is Kosher.”

With over 45 million followers on Instagram and more than 100 million total across his social media platforms, James’ actions and pronouncements can frequently become national news so the weekend blunder took many professional LeBron watchers by surprise.

“Surprised LeBron, who makes very few mistakes, put this out,” sports reporter Darren Rovell said in a tweet. “Does quoting lyrics from a song absolve the person quoting from the responsibility behind the words? I’d argue no, especially with a following of 45 million.”

A rep for the James did not immediately respond to request for comment from TheWrap.