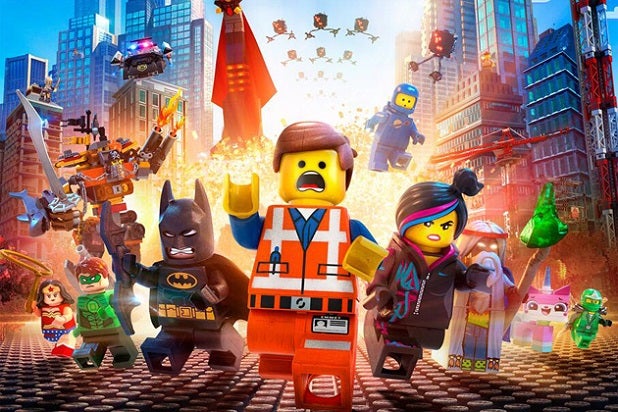 It’s all fitting together just right for “The Lego Movie,” which is positioned to deliver the biggest box-office opening of the young year this weekend.

The 3D family film, the first animated release from Warner Bros. in three years, is expected to end the three-week reign of “Ride Along” and beat the $41.5 million January opening of Universal’s Kevin Hart-Ice Cube comedy.

George Clooney‘s “The Monuments Men” debuts this weekend as well, along with the teen-targeting comic fantasy “Vampire Academy” from the Weinstein Company. The World War II art-heist action drama from Sony is projected to land between $15 million and $20 million by analysts, who see TWC’s young-adult tale coming in with around half that.

The PG-rated “The Lego Movie” has a lot going for it: It will be in a very healthy 3,650 theaters nationwide, many of which will offer 3D. Thinking franchise, Warner Bros. already has begun work on a sequel.

“This is going to connect with all of the demographics,” said Exhibitor Relations vice-president and senior analyst Jeff Bock. “It’s seems to have that ability to amuse adults while entertaining the kids, and that’s a winning formula, as we saw with ‘Wreck-it-Ralph.'” That Disney animated tale opened to $49 million and took in $471 million globally in 2012.

Directed and co-written by Phil Lord and Chris Miller, the team behind hits “Cloudy with a Chance of Meatballs” and “21 Jump Street,” “The Lego Movie” expectations would be even higher were it not for the terrible weather expected to blanket much of the nation.

Chris Pratt, of TV’s “Park and Recreation” voices Emmet, who is mistaken for the master builder who can save the Lego universe from Lord Business (Will Ferrell). He teams up with characters voiced by Will Arnett (Batman), Elizabeth Banks (WildStyle), Channing Tatum (Superman), Will Forte (Abraham Lincoln), Nick Offerman (Metalbeard the Pirate) and Alison Brie. Also piping in are Jonah Hill, Morgan Freeman, Charlie Day and Cobie Smulders.

The presence of WB-licensed DC Comics characters like Batman, Superman, Wonder Woman and Green Lantern – not to mention Gandalf from “The Hobbit” franchise — is no accident, and Bock saw it as stroke of synergistic genius.

Most of the early reviews have been nearly rhapsodic — its Rotten Tomatoes rating is still 100 percent — and social media signs are strong. “The Lego Movie” is way ahead of “Hotel Transylvania” on Twitter, and that one opened to $42.5 million in 2012. It’s easily the hottest ticket at online broker Fandango, and is pacing ahead of “The Croods,” which debuted to $43.6 million last March.

“Frozen” hasn’t melted yet and “The Nut Job” has performed steadily since opening Jan. 17, but “The Lego Movie” is the first new family film since then. It will have an otherwise clear field until Fox rolls out “Mr. Peabody and Sherman” on March 7, so you’ll probably get your fill of the the movie’s infectious  “Everything Is Awesome” song. 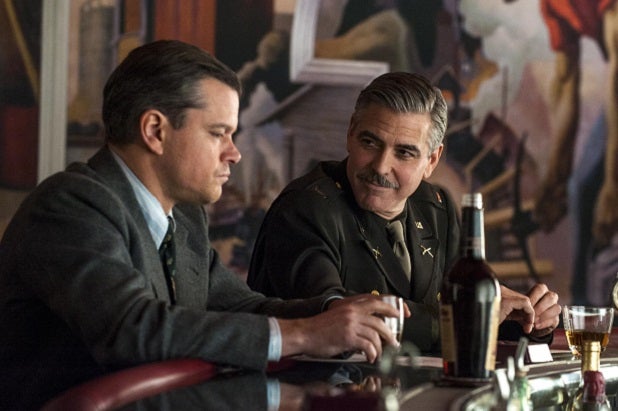 Clooney produced and wrote “Monuments Men” with Grant Heslov, and directs as well. His most recent directing efforts, “Ides of March” and “Leatherheads,” underwhelmed at the box office, but his last appearance on the big screen was in the blockbuster “Gravity.”

Given its subject matter – a WWII platoon tries to rescue art masterpieces from Nazi thieves — it’s not surprising that “Monuments Men” is tracking most strongly with older moviegoers. That gives it a chance at an extended domestic run, and it is expected to do well overseas where Fox is distributing, especially in Western Europe.

Working against it are some surprisingly tough reviews; it’s at just 53 percent positive on Rotten Tomatoes. But it surged on social media Tuesday, and is now pacing ahead of “Argo,” which opened to $19 million in October of 2012. Sony will have it in more than 3,083 theaters.

The weekend’s other wide opener, “Vampire Academy,” is the latest movie based on a best-selling young adult novel series – in this case, the best-selling novels of Richelle Mead – to target teens.

It’s first foray into the young-adult market for the Weinstein Company, which picked up the modestly budgeted “Vampire Academy” at Berlin’s European Film Market last year.

Also read: How Does ‘Divergent’ Stack Up Against ‘The Hunger Games’ and ‘Twilight’?

Many movies have tried to duplicate the success of the teen-targeting “Twilight” and “Hunger Games” franchises, without much luck. “Mortal Instruments: City of Bones,” “The Host” and “Beautiful Creatures” all failed last year, and it’s hard to see “Vampire Academy” breaking out.

The tracking is soft and the social media is a split. It’s doing better than “Beautiful Creatures” on Twitter, but trails it on Facebook. That one opened to $7.5 million about this time last year. It wasn’t screened for critics.