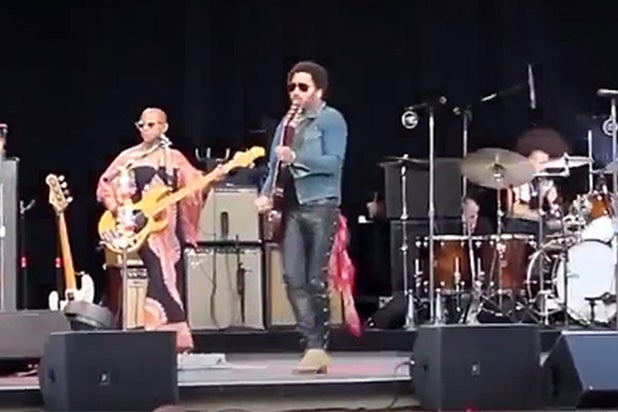 Talk about letting it all hang out.

“Are You Gonna Go My Way” singer Lenny Kravitz gave a concert audience more than they bargained for during a show in Sweden on Monday, when his skin-tight leather trousers ripped mid-performance.

Unfortunately, or fortunately, depending on how you look at it, Kravitz exposed his manhood to thousands of unsuspecting fans.

Ever the pro, he exited the stage for a much-needed wardrobe change before returning to rock the crowd without showing them his naughty bits, according to NME.

Several people in the audience captured Kravitz’s NSFW moment on video and the images caused a lot of excitement across the web.

On Tuesday, the singer posted on Twitter an image of a text he received from Aerosmith’s Steven Tyler, who said, in part, “Dude … No underwear and pierced … You never showed me that.” Kravitz tagged the tweet “#penisgate.”

Go ahead and let love rule by clicking on the video below.