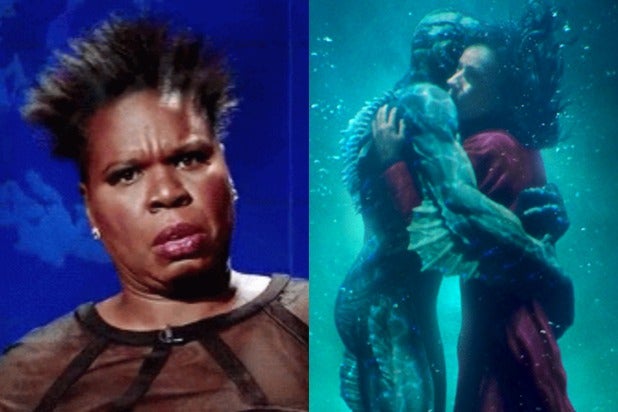 “Saturday Night Live” star Leslie Jones live tweeted while watching Guillermo del Toro’s sci-fi love story “The Shape of Water” and had one thing to say about that odd girl-on-amphibian-man sex scene: “What am I watching?”

Most of Jones’ tweets were simple observations, like, “Ok I need to barf now!” after Michael Shannon’s character proudly announced that he doesn’t wash his hands after using the urinal.

But it’s the interaction between Sally Hawkins’ Elisa and Doug Jones’ amphibian man that left the comedian flummoxed.

Also Read: 'Shape of Water' Actor Doug Jones Says Sex Toy Based on His Character Is 'Not Exactly What I'd Hoped For'

For those who haven’t seen “The Shape of Water,” it’s about a lonely mute cleaning lady in a secret research facility who forms a unique relationship with an amphibian man held in captivity.

Take a look at just a few of Jones’ tweets. Oh, and be warned, Jones’ language gets a little racy.

Ok I need to barf now! You believe you more if a man cause you don’t wash your hands ew! #shapeofwater pic.twitter.com/eTc39WKFEv

How you gonna explain a fish man to your landlord?! #shapeofwater pic.twitter.com/PPOBAy76Og