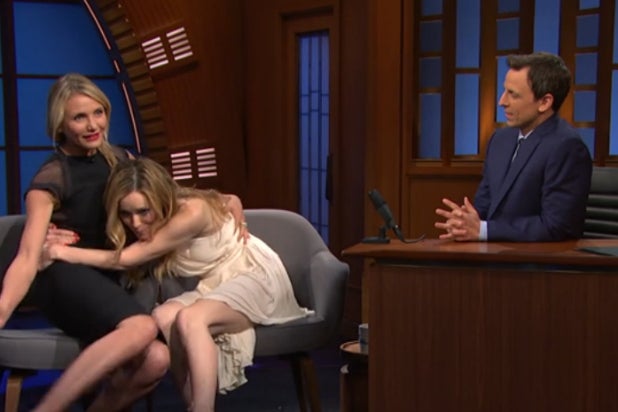 Leslie Mann and Cameron Diaz were all over each other on Thursday’s “Late Night,” sharing stories from the set of “The Other Woman” and even finishing each other’s sentences.

It was cute, but also made you wonder what they were served in the NBC Studio 8G green room.

The duo shared everything from pranking Kate Upton, their secret to physical comedy and a childish tune about balls. Yes, balls — it was that kind of segment.

Both of Seth Meyers’ guests also bragged about getting to make out with co-star Nikolaj Coster-Waldau (Jaime Lannister from “Game of Thrones”) for their new comedy, which comes out on Friday.

“I was so excited, because I’ve been married for 17 years,” Mann said, referring to her equally famous husband Judd Apatow. “But … we kissed, and I broke out in hives — like big hives on my face.”