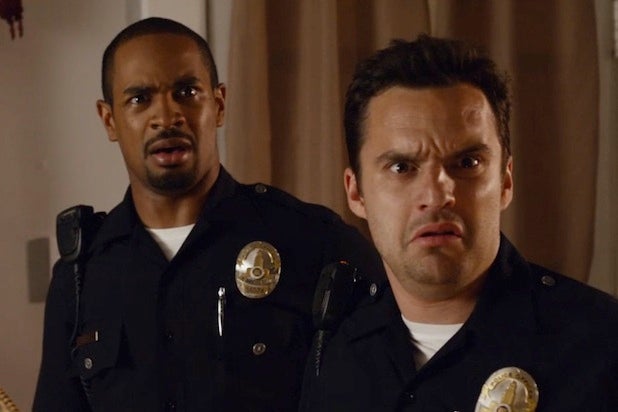 “Let’s Be Cops” may be the summer’s next R-rated comedy hit — providing ticket buyers completely disregard the critics pumping it full of lead.

The 20th Century Fox release starring Jake Johnson (“New Girl”) and Damon Wayans Jr. (“Happy Endings”) as two Los Angeles losers who pretend to be cops after dressing up for a party has been nearly universally panned in reviews summing it up as, simply, not that funny.

Director Luke Greenfield‘s comedy he co-wrote with screenwriter Nicholas Thomas has accumulated a 9 percent “rotten” rating on Rotten Tomatoes, with only three out of 33 critics providing positive feedback.

TheWrap‘s Alonso Duralde was one of many who expected more laughs from what promised to be a ridiculous romp starring two male leads with proven chemistry from Fox TV comedy “New Girl.”

“It would be unfair to cite ‘Let’s Be Cops’ for being completely unfunny, but the movie at least deserves a warning for carrying so little actual humor over the course of its running time. A mild chuckle every five minutes or so doesn’t justify the predictable slog of this mistaken-identity farce,” Duralde wrote in his review. “With a combination of jokes that don’t land and a constant flurry of exposition and plotting to keep these flimsy plates spinning, ‘Let’s Be Cops’ more often than not feels more like a court-ordered defensive-driving class than a rousing high-speed chase.”

Washington Post critic Ann Hornaday referred to the comedy as a “fake buddy-cop flop” for similar reasons, mainly stemming from a problematic script.

“‘Let’s Be Cops’ is the kind of movie that depends for laughs on tired bits involving kids swearing, and sustains the audience’s interest with frequent excuses to ogle shapely women dancing provocatively in bars, at parties or, in one unsavory instance, on her own skankily disheveled couch,” Hornaday wrote. “Johnson and Wayans are both gifted comic performers but are given way too little to do in a film that wends its way from set piece to set piece, not with antic glee but desultory and-then-this-happens randomness.”

Toronto Star critic Bruce DeMara went as far as to call the movie “appalling,” hoping “the ill-conceived premise and a poorly written script takes a dive at the box office.”

“Let’s overlook the fact that the film’s distributors refused to offer an advance screening for movie critics. They know and we know that the film is going to be poorly reviewed,” DeMara wrote. “Finally, let’s earnestly hope there is no sequel.”

New York Daily News critic Jordan Hoffman went as far as to decry the ending of the largely unfunny movie as actually “insulting.”

“You have the right to remain silent and, for much of ‘Let’s be Cops,’ you will be,” Hoffman wrote. “This alleged comedy takes a long time before it gets its first laugh in. The first half is a complete slog and the ending is insulting, but there are a few semi-arresting sketch comedy moments.”

Arizona Republic critic Bill Goodykoontz wrote: “Yay, stupid! That could be the motto of the people behind “Let’s Be Cops,” a ridiculous comedy whose greatest sin is one of omission: a lack of humor. And that’s a hard one to forgive.”

But A.V. Club critic A.A. Dowd managed to forgive the movie of its many faults mentioned above, and gave the movie a B- solely because of the “inspired rapport of its stars.”

“Wayans does the exasperated-partner act well, while still getting to cut loose during a scene of his character tripping out on crystal meth. And Johnson, who’s never funnier than when erupting into laughter himself, marries the man-child affability of Nick Miller to a more destructive streak of juvenile mischief,” Dowd wrote. “At times, the movie seems to exist for no other purpose than to collide these two personalities together, privileging their antagonistic banter above all else. But isn’t that the basic point of all buddy comedies?”