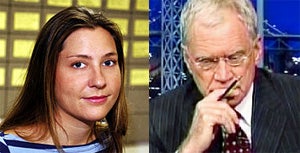 Stephanie Birkitt, David Letterman’s former assistant and reportedly one of the female staffers the “Late Show” host was referring to when he admitted having had sex with women who worked for him, was at one time a frequent guest on the show.

So much so that she became something of a minor celebrity.

(According to TMZ, Birkitt was recently liviing with Robert "Joe" Halderman — the "48 Hours" producer who was arrested yesterday in the alleged extortion plot.)

If the affair turns out to be true, this interview Birkitt gave Entertainment Weekly in 2002 is not only ironic, it could prove useful in court:

Stephanie Birkitt’s duties as David Letterman’s assistant are pretty typical: taking calls, planning schedules, and having on-air phone chats with Dave about her weekend adventures. ”It started out just as a show joke — Dave would call up somebody in the office and say, ‘Would you mind taping ”Jackass” for me?’ He started talking to me more, and we developed a rapport,” explains the 27-year-old New Hampshire native. Birkitt recently took a break from her ”Late Show” duties to show off her breeze-shooting skills for EW.

Is there a TV Dave and a real life Dave? He likes to play the crank on camera.

He’s not that way at all. He’s the best boss I’ve ever had.

If Rupert named a Hello Deli sandwich after you, what would be in it?

Probably turkey. Or beef. I like to eat a lot, so it’d be hard to narrow it down…. One time we had a bunch of pizzas in the office. There were 12 pieces left, and Dave said, ”I’ll give you $300 if you can eat it all.” I managed to eat only nine slices, [but] he was gracious enough to pay me $20 per slice, even the slices I’d eaten before.

Why does Dave wear white socks with his dark suits?