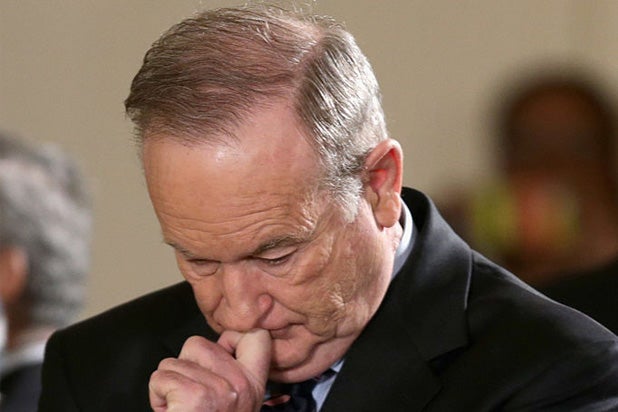 Just over two weeks after the it came out that Fox News has paid at least $13 million in settlements to women who accused O’Reilly of sexual harassment, the network announced this morning that it has parted ways with the host of “The O’Reilly Factor” after 21 years.

The firing caps a brutal two weeks for O’Reilly, who faced his first sexual harassment scandal in 2004 but came away unscathed (even if his name became synonymous with the word “falafel”). Since the multiple settlements paid by Fox became public however, additional accusers have come forward with even more disturbing allegations, Fox’s internal morale has reportedly cratered, and the “Factor” has seen a massive exodus of advertisers.

Needless to say, O’Reilly’s critics are positively ecstatic. Liberal Twitter resembled a combination of “Ding Dong the Witch Is Dead” and the Ewok celebration at the end of “Return of the Jedi,” as celebs and civilians alike rejoiced in the apparent demise of O’Reilly’s career, and the manner in which it happened.

Some reveled in the fact that O’Reilly is out of a job.

I Was Ambushed By Bill O’Reilly. But I Still Have A Job And He Doesn’t. AMA.

Others put his name forward as a possible replacement for White House Press Secretary Sean Spicer.

Bill O'Reilly's brand is so toxic right now the only place that might hire him is the White House.

Others simply basked in the warm glow of schadenfreude.

I say this in all sincerity, without joy, and with malice towards one: fuck Bill O'Reilly.

Between what Bill O'reilly & Bill Cosby have allegedly done to women, I don't trust Bills. If I so much as get a bill in the mail I'm suing.

Aaron Hernandez is dead. Serena is pregnant. Bill O’Reilly is unemployed. It’s not even 9 a.m. out here in California.

the desire to do something about Bill O'Reilly's shittiness is what got me into media writing and politics, so this is nice

how can I pre-preorder the revenge fantasy novel Bill O'Reilly started writing an hour ago?

It's poetic justice that Bill O'reilly is getting fired from Fox News during Sexual Assault Awareness Month.

Bill O'Reilly and Jason Chaffetz both leaving? I never want this day to end.

And here’s a few from before O’Reilly was officially canned, but they’re too good not to share.

Dear @oreillyfactor now that you no longer have a TV show – you can do EVERYTHING LIVE!