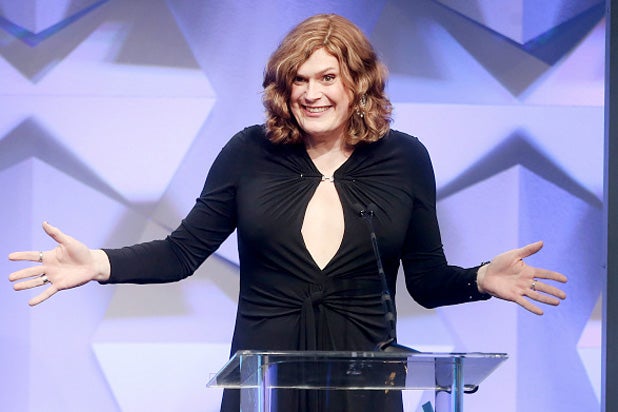 Wachowski, who co-directed “The Matrix” series with her then-brother, caused a sensation on the red (blue, actually) carpet at the Beverly Hilton Hotel, entering behind actress Patricia Arquette. Her sister Lana, who made her own transition to female in 2008, had not yet arrived. (Carpet photos will be added to this post as soon as they become available.)

“My flight instinct is off the charts right now but you have to fight against it,” Lilly Wachowski told TheWrap of her nerves. She said she and sister Lana were never fans of the publicity machine surrounding the release of their creative work, but Wachowski braved the cameras in support of their Netflix series “Sense8.”

Lilly Wachowski, who previously went by the name Andy, broke the news of her transition in an open letter this March, after U.K. publication the Daily Mail launched an investigation into her possible gender reassignment.

Also Read: It's the Wachowski Sisters Now After Andy Comes Out as Lilly

“Being transgender is not easy. We live in a majority-enforced gender binary world. This means when you’re transgender you have to face the hard reality of living the rest of your life in a world that is openly hostile to you,” she wrote at the time.

“I am one of the lucky ones. Having the support of my family and the means to afford doctors and therapists has given me the chance to actually survive this process. Transgender people without support, means and privilege do not have this luxury. And many do not survive.”

The notoriously press-shy directors have long spoken about their aversion to public life, and Lana chose a similar forum to Lilly’s in telling her own story.

Accepting an award from the Human Rights Campaign in 2012, Lana detailed her journey in a speech universally praised as bold and candid.

“Sense8” was renewed for a second season last August, and is currently shooting around the world. The drama, starring Daryl Hannah and Naveen Andrews, is expected to premiere in early 2017.