Legal threats from Ivanka Trump and Jared Kushner aimed at the Lincoln Project’s Time Square billboards that associates them with the Trump administration’s failed COVID-19 response isn’t scaring the anti-Trump organization one bit.

“Please peddle your scare tactics elsewhere. The Lincoln Project will not be intimidated by such empty bluster,” attorney Matthew Sanderson wrote in a lengthy response to Trump and Kushner’s lawyer, Marc E. Kasowitz.

The billboards on the corner of 44th Street and Broadway in the heart of Times Square feature the president’s daughter and son-in-law, with one of Ivanka Trump smiling and gesturing towards the national and New York state numbers of COVID-19 deaths, and the other of Kushner smiling alongside a quote that reads “[New Yorkers] are going to suffer and that’s their problem.”

The Lincoln Project — a political action committee formed by Republicans whose goal is to prevent the re-election of Donald Trump — posted the letter from Kasowitz Friday evening, calling it, “Nuts!” and quickly responded with a statement, saying in part, “Jared and Ivanka have always been entitled, out-of-touch bullies who have never given the slightest indication they have any regard for the American people. We plan on showing them the same level of respect.”

But Sanderson’s comments went further in a three-page response to Kasowitz Saturday night, saying that Trump and Kushner are “public officials” and have been such “since President Trump, in a gross act of nepotism, awarded” them White House positions in 2017.

“Americans have the right to discuss and criticize their public officials freely,” Sanderson wrote. “Public officials have periodically tried, as Kr. Kushner and Ms. Trump do here, to evade accountability and muzzle dissent by threatening or filing defamation lawsuits against critics. Fortunately, substantial constitutional protections are afforded to those who speak out about public officials.”

Sanderson goes on to point out that the Lincoln Project’s billboards are, “in any event, are entirely accurate.”

The quote attributed to Kushner is from a Vanity Fair article in which he criticized New York governor Andrew Cuomo’s handling of the outbreak. Kushner told VF that Cuomo didn’t “pound the phones hard enough” for protective equipment, before adding: “His people are going to suffer and that’s their problem.”

He also points out that contrary to Kasowitz’s claim that “Ms. Trump never made any such gesture,” she did when she “infamously endorsed a commercial product” in July by posting herself with a photo of Goya Black Beans “in violation of federal ethic rules” in the process. The Lincoln Project replaced that can with statistical references to the number of New Yorkers and Americans who have died of COVID-19.

“The truth may cause Ms. Trump personal discomfort, but her bruised self-image does not change the fact that this billboard accurately depicts her support of a federal response that has utterly failed to prevent an unmitigated tragedy for the United States,” Sanderson wrote.

“Sue if you must,” Sanderson continued. “In the meantime, may I suggest that if Mr. Kushner and Ms. Trump are genuinely concerned about salvaging their reputation, they would do well to stop suppressing truthful criticism and instead turn their attention to the COVID-19 crisis that is still unfolding under their inept watch. These billboards are not causing Mr. Kushner and Ms. Trump’s standing with the public to plummet. Their incompetence is.”

Kasowitz didn’t immediately respond to the request for comment.

You can read Sanderson’s letter to Kasowitz in full below. 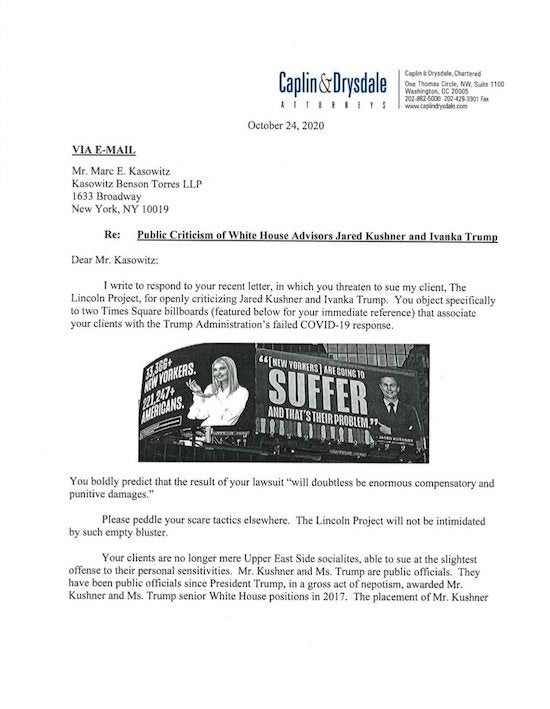 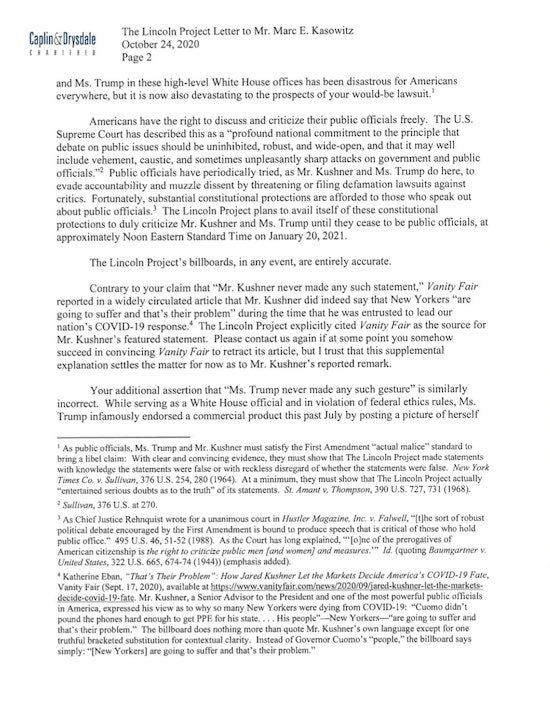 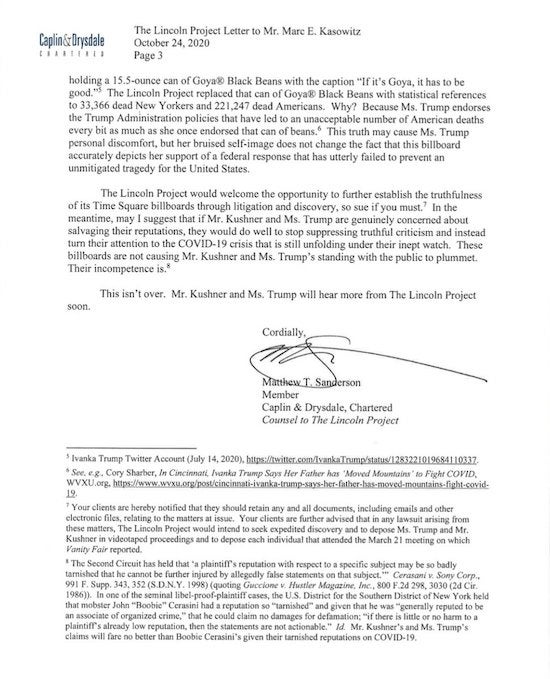