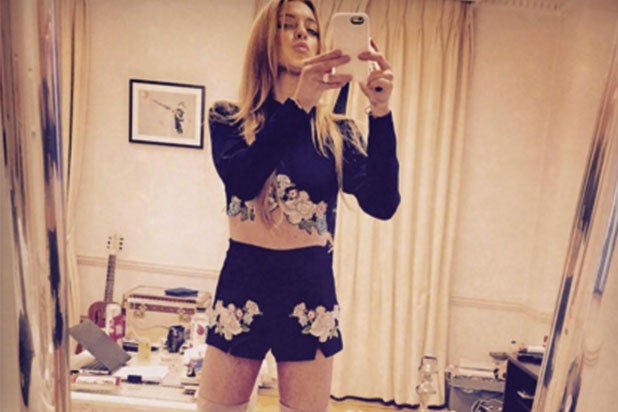 Lindsay Lohan dressed up as murdered actress Sharon Tate on Charles Manson’s birthday, and many people are not only wondering why, they’re also hurling angry vitriol at the “Mean Girls” star.

Reactions range from “you really have no talent” to “what a disgusting trashbag,” and much, much worse.

The outrage stems from a selfie Lohan posted to Instagram on Thursday. She wore a crop top and thigh-high boots — an apparent homage to the actress murdered by Manson’s followers — and wrote, “I love Sharon Tate.”

Manson, who turned 81 the same day, is currently serving nine concurrent life sentences in California for the nine murders he committed in the summer of 1969. The cult leader sent members of his commune to Tate’s Los Angeles home on Aug. 9 while she was having friends over. The members stabbed everyone to death. Tate was eight and a half months pregnant with husband Roman Polanski‘s baby at the time of the incident.

See some of the most outraged Tweets below.

@lindsaylohan You really have no talent.. Don't know why your a celebrity

So glad that Lindsay Lohan and Charles Manson finally found each other.

Lindsay Lohan is a moron

The @lindsaylohan Sharon Tate stunt only reinforces my stance that she needs to to be gangbanged by rods of white hot rebar.

@lindsaylohan has NO respect, dressing up as murdered actress Sharon tate on Charles mansons birthday is tasteless, ur life has no VAULE

That's really tacky. And that was done purposefully. Must be hard to live in a world where you value yourself… https://t.co/QJPnCDUtDK

Really Lindsay Lohan? A Sharon Tate costume? It must be hard not being relevant when you're not bent over snorting coke

Lindsay Lohan dressing up like Sharon Tate on Charles Manson's B-Day was in poor taste. Those boots r so atrocious. pic.twitter.com/JH8i3kLLNQ