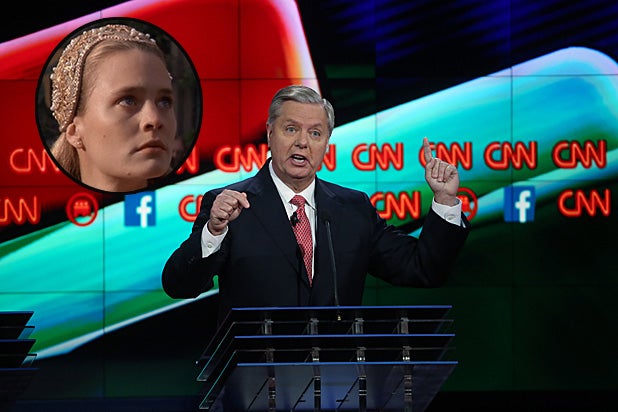 A “Princess Bride” reference made a surprising appearance during the GOP debate in Las Vegas on Tuesday, quickly becoming a trending topic on Twitter.

Sen. Lindsey Graham referenced the 1987 classic while discussing the Middle East during the earlier undercard debate.

Graham took a swipe at Sen. Ted Cruz’s proposals for Syria, claiming one of the characters from the Texas senator’s favorite film, Princess Buttercup, would not approve.

“Ted getting in bed with Iran and Russia to save Assad is inconceivable,” Graham said. “Princess Buttercup would not like this.” Graham was referring to Syrian President Bashar Assad.

Cruz has stated in the past that he is an avid fan of the film, mentioning the movie during several speeches and fundraisers, and reciting lines while on the campaign trail.

But earlier in the week, one of the film’s stars, Mandy Patinkin, said that Cruz’s policies go against what the movie stands for.

“This man is not putting forth ideas that are at the heart of what that movie is all about,” Patinkin told the New York Times. “I would love for Sen. Cruz, and everyone creating fear mongering and hatred, to consider creating hope, optimism and love. Open your arms to these people, these refugees trying to get into our country, and open your hearts.”

As soon as Graham dropped his zinger Twitter was flooded by funny memes:

Princess Buttercup responds to being invoked at the #GOPDebate. pic.twitter.com/ncPLwkKlPz

"PRINCESS BUTTERCUP WOULD NOT LIKE THIS!" — Lindsey Graham. pic.twitter.com/YBAh86t99S

WWPBD: What Would Princess Buttercup Do?

Princess Buttercup would shoot down Russian planes and would not Casablanca with Putin. There, you're caught up.