“The Batman” is a movie about Batman, and of course Batman movies are well known for their moody, dark film scores, so you’re probably assuming that “The Batman” has such a score. That assumption would be correct. You can listen to the movie’s main theme, composed by Michael Giacchino, at the top of the page right now.

It’s hard to pin down just how I’m feeling about this. The first half of this is new material, the second half is stuff you’ve heard before (more on that below). It’s gorgeously produced and pleasant enough — and somewhat of a relief that the new material here isn’t reflexively *dark.* In many places it almost feels optimistic, which I’m guessing, given how often we’ve seen clear breaking dawn imagery in trailers and photos, is going to be a theme during the film.

But it doesn’t really have anything close to a strong melodic hook — this isn’t trying to be Danny Elfman or John Williams — it’s mainly just two separate ideas sort of grafted together. First, a beautifully produced sonata, and then the pounding, repeating tones we’ve already heard in previous trailers, building and building like an EDM song until the inevitable drop. 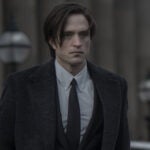 Also Read:
‘The Batman’ Is the Longest Batman Movie Ever Made

Overall, it feels like it exists somewhere between Liszt and Phil Spector, and at least, it does stand out more than any of the music from Christopher Nolan’s “Dark Knight” trilogy. Whether it functions as something other than background music, as the vast majority of blockbuster scores now do, remains to be seen. Hopefully not! In any event, I’m glad “The Batman” isn’t trying to trick our brains with nostalgic looks back to Tim Burton’s “Batman” or Nolan’s trilogy.

“The Batman” is directed by Matt Reeves and co-written by Reeves and Peter Craig. It stars Robert Pattinson as Batman, Zoe Kravitz as Catwoman, Paul Dano as The Riddler and Jeffrey Wright as Commissioner Gordon.

It also features Colin Farrell as the Penguin, who is getting his own HBO Max series as is Wright’s Gordon. And along for the ride are John Turturro as mob boss Carmine Falcone, Andy Serkis as Alfred Pennyworth and Peter Sarsgaard as Gotham City’s District Attorney.

“The Batman” comes out exclusively in theaters on March 4, 2022. Assuming, of course, that COVID doesn’t keep COVIDing.