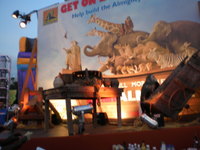 A little late, yes, but we're busy. We attended the premiere of "Evan Almighty" a week ago, a modest but sprawling affair at Universal Studios (one might have expected live elephants; there were none). Meantime, Universal has good cause to be nervous about the opening of this $175 million behemoth, directed by the single-minded Tom Shadyac. It's far softer than its predecessor, "Bruce Almighty," and most of the laughs come from Wanda Sykes, a supporting character, rather than Steve Carrell, the lead. The movie is not tracking terribly well, and we all know that comedies traditionally do not perform overseas as well as their action counterparts. At the premiere, lots of NBC-Universal love was in the house; top dog Jeff Zucker was there, as was the new NBC entertainment chief, Ben Silverman, looking preppy and sounding upbeat (this is pretty much the only direction NBC can go from here). Universal chief Ron Meyer looked suitably in charge and relaxed, despite the cost of this film. He's a rare breed in this industry: a survivor, and just re-upped his contract for five years.