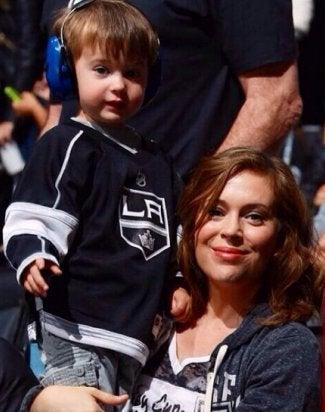 It was a hard-fought battle, but the Los Angeles Kings emerged triumphant with a double-overtime victory over the New York Rangers in Game 5 of the Stanley Cup finals. With the team playing on home ice, Los Angeles erupted with excitement, both on the streets and online.

Hollywood reacted with the same level of excitement in seeing their home team bring home the Cup for the second time in three seasons. Many celebrities were live Tweeting the game, while others waited until it was over to trumpet their joy and support across the Internet.

See photos: Hollywood Gets Hockey Fever as the LA Kings Close in on the Cup

We’ve gathered some of the best and funniest reactions we saw, including a few kind words from some disheartened New York fans.

Who needs #FridayThe13th when ur a @NYRangers fan? Look how long I’ve been loving our @LAKings! #StanleyCup http://t.co/P0xnQf1sN1 — Greg Grunberg (@greggrunberg) June 13, 2014

I can’t believe I get to see this in person. #BecauseItsTheCup #GoKingsGo #2014StanleyCupChampionKings #butts — Wil Wheaton (@wilw) June 14, 2014

Omg congrats you amazing @LAKings looks like we are having a parade. Awesome job. Way to go #LAKings — Patti Stanger (@pattistanger) June 14, 2014

congrats to @lakings #stanleycupchampions. no one has more grit than @nyrangers. inspiring and painful at the same time. 2 double OT loses. — Dierks Bentley (@DierksBentley) June 14, 2014