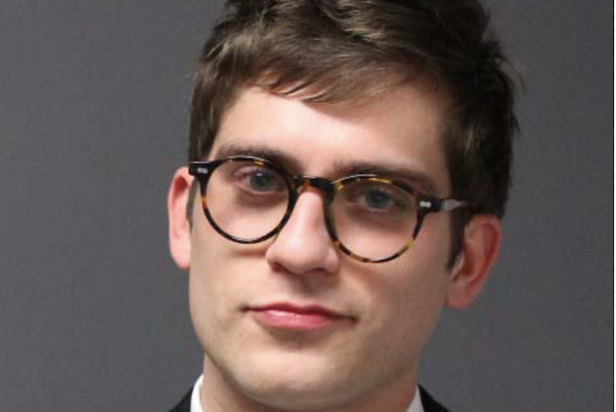 A conservative blogger was arrested by University of Connecticut police Tuesday night following an altercation with a woman during a speaking engagement hosted by the College Republicans club at the university.

Lucian Wintrich, a White House correspondent for the conservative website Gateway Pundict, left the podium about an hour into his speech titled “It Is OK To Be White” and darted up the stairs of the auditorium to grab a woman. The incident was captured on video.

“Video of the altercation shows that the guest appeared to remove paperwork from the lectern where Mr. Wintrich was speaking, and that he followed the woman into the audience, where the altercation occurred,” UConn spokeswoman Stephanie Reitz said in a statement to TheWrap.

The crowd responded by pushing and shoving until UConn police escorted Wintrich out of the auditorium and into the hallway, then the bathroom.

Wintrich had been interrupted multiple times by attendees who shouted “Go home, Nazi” and “Black lives matter,” to which the blogger responded with his own jabs, according to the Courant. When many audience members began to leave, some walked toward the podium to confront Wintrich, according to the Hartford Courant. He later pursued the woman.

Reitz said the blogger was charged with breach of peace by the UConn police and released on $1,000 bail. Reitz noted Wintrich is scheduled to make his initial appearance in Rockville Superior Court in Vernon, Conn. on Dec. 11.

“This was a very disappointing evening,” UConn President Susan Herbst said in a statement to TheWrap. “Thoughtful, civil discourse should be a hallmark of democratic societies and American universities, and this evening fell well short of that.

“UConn Police also are investigating an incident in which someone broke a window in the lecture hall as the crowd was leaving and threw a smoke bomb inside,” Reitz added. “This led to speculation as to whether police had discharged tear gas, but that was not accurate — no tear gas was used or needed.”

A UConn student was arrested on a charge of breaking the window and released on a $1,000 non-surety bond.

The university noted that the case remains open and videos are under review to determine whether any additional charges or arrests of others are warranted.

BREAKING: @lucianwintrich appears to attack a @UCONN student during speech after she took something off podium. pic.twitter.com/WAcNYAak7c