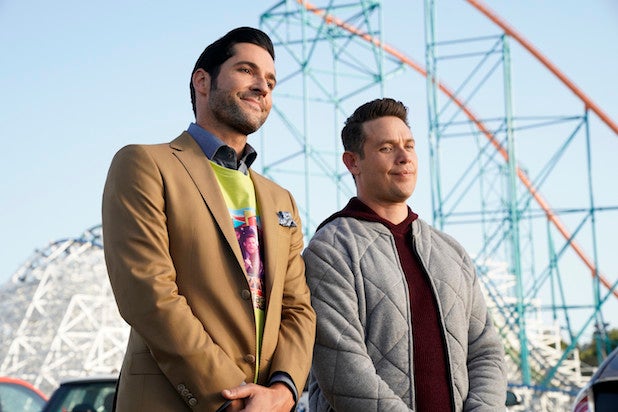 (Spoiler alert: Please do not read ahead unless you’ve seen the series finale — or possibly just Season 3 finale — of “Lucifer.”)

Kevin Alejandro was not prepared for “Lucifer” to get canceled. And neither was anyone else on the cast of the recently-axed Fox series — let alone its fans. So a period of mourning has sent in for those who want to see the devil rise from cancellation hell.

Luckily, there are two things that have Alejandro — who plays Detective Dan “Douche” Espinoza on the dramedy — in high spirits. First, it looks like the fan campaign #SaveLucifer — led by Lucifer (Tom Ellis) himself — might actually be working. And second, Alejandro will be making his TV directorial debut Monday night when two “bonus” episodes of “Lucifer” air on Fox.

“We’re all so amazed and touched and humbled by the overwhelming response that our fans have voiced. And I think it’s through that where the necessary people have heard their voices,” Alejandro told TheWrap.

“I’m sure that if there is a platform where ‘Lucifer’ can exist again, I know that our team of filmmakers — the Jerry Bruckheimer team, Peter Roth and everyone who loves the show as much as us — I’m sure that they will have the right conversations and if everything makes sense then, yes, we would all love to move forward in a new home for ‘Lucifer,'” Alejandro added. “And the fact that no one is telling us that there is no chance, gives us all hope. And it’s because of how loud our audience is speaking.”

Ellis said in a recent interview with BBC Newsnight that the outcry from fans “sparked” a conversation to move it to another platform — but he can’t say where. An individual close to the situation told TheWrap that Warner Bros. TV is actively looking for a new home for “Lucifer.”

The episodes “Once Upon a Time,” the installment Alejandro directed for “Lucifer,” and “Boo Normal” — both of which were originally set to air in the currently scrapped Season 4 — will be broadcast Monday night. The Alejandro-led episode happens to be the very last one the cast filmed.

“It’s a ‘what-if?’ world,” Alejandro said of “Once Upon a Time.” “It’s a universe that doesn’t exist. So we got to joke around and call it a ‘re-pilot’ episode, because all of the traditional ‘Lucifer’ roles didn’t really necessarily have to completely apply in this episode.”

“It’s a world in which God questions — played by Neil Gaiman, by the way — would Chloe (Lauren German) and Lucifer’s paths still have crossed, had he not put Chloe in Lucifer’s path?” the actor added. “So this whole episode entertains that idea in a very beautiful way. It was super cool to recreate this ‘Lucifer’ universe with subtle differences. And still the challenge was to maintain the characters, and much of the universe the audience already knows and loves.”